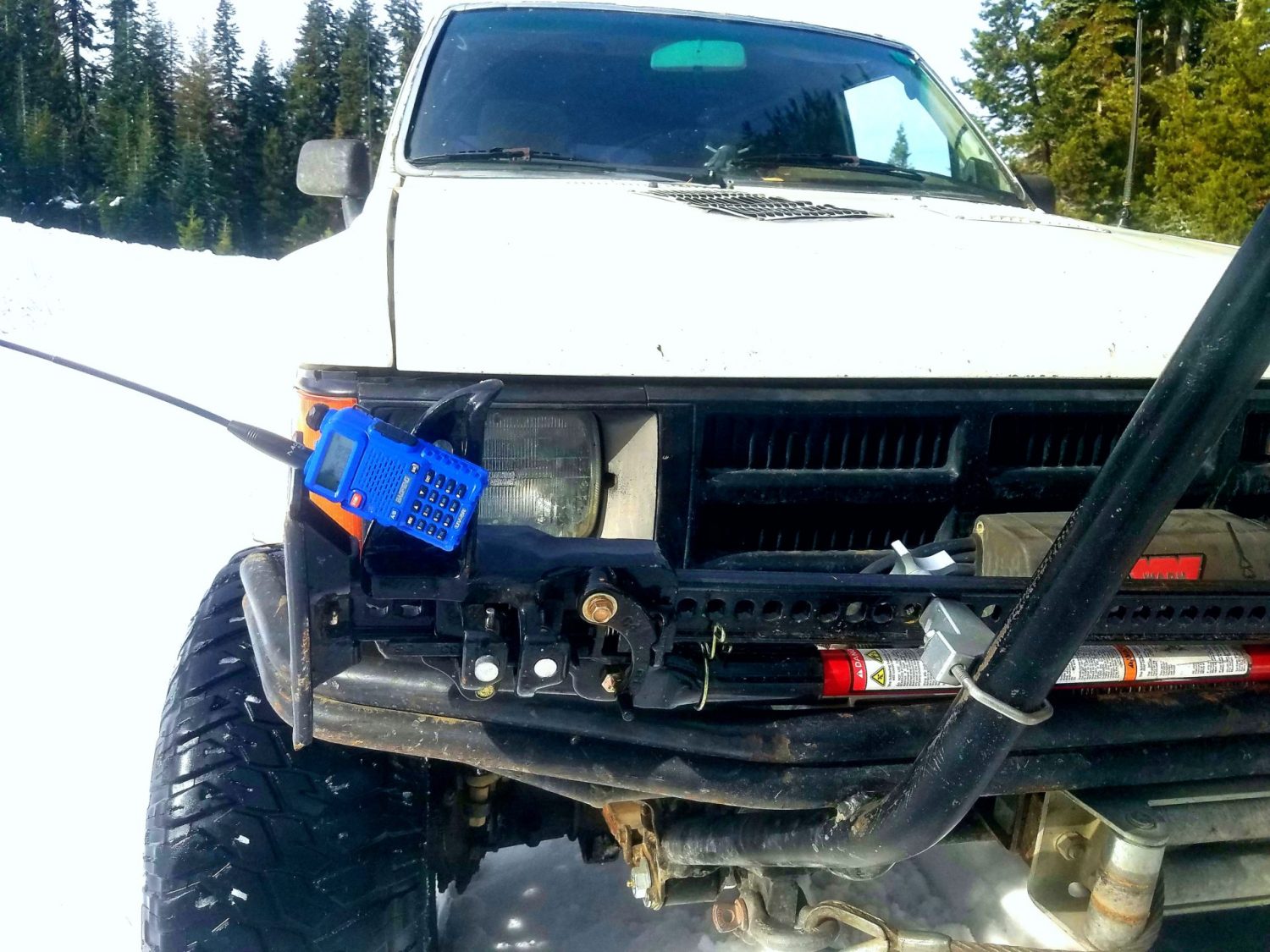 What’s The Difference Between Ham Radios and Race Radios or UHF/VHF Radios???

An extremely common question that we get asked allllll the time is, “Whats the difference between “Race Radios” (UHF and VHF Radios) and Ham Radios?” Simply put… Ham radios do EVERYTHING better. If you have switched over from a CB and started using VHF or UHF radios, then we applaud you! You are one step closer to the dark side!

VHF, UHF, and Ham radios run on FM, CBs run on AM. Think of driving in your car and switching your car stereo from FM to AM. AM is always scratchy and a lot more white noise. FM is nice, clean, crisp, and clear. Because of this, CBs don’t even make it into this conversation other than to say get rid of it! The main differences between “race radios” and ham radio handhelds, are the frequencies they operate on, the power they are allowed to operate at, and the magical use of repeaters. 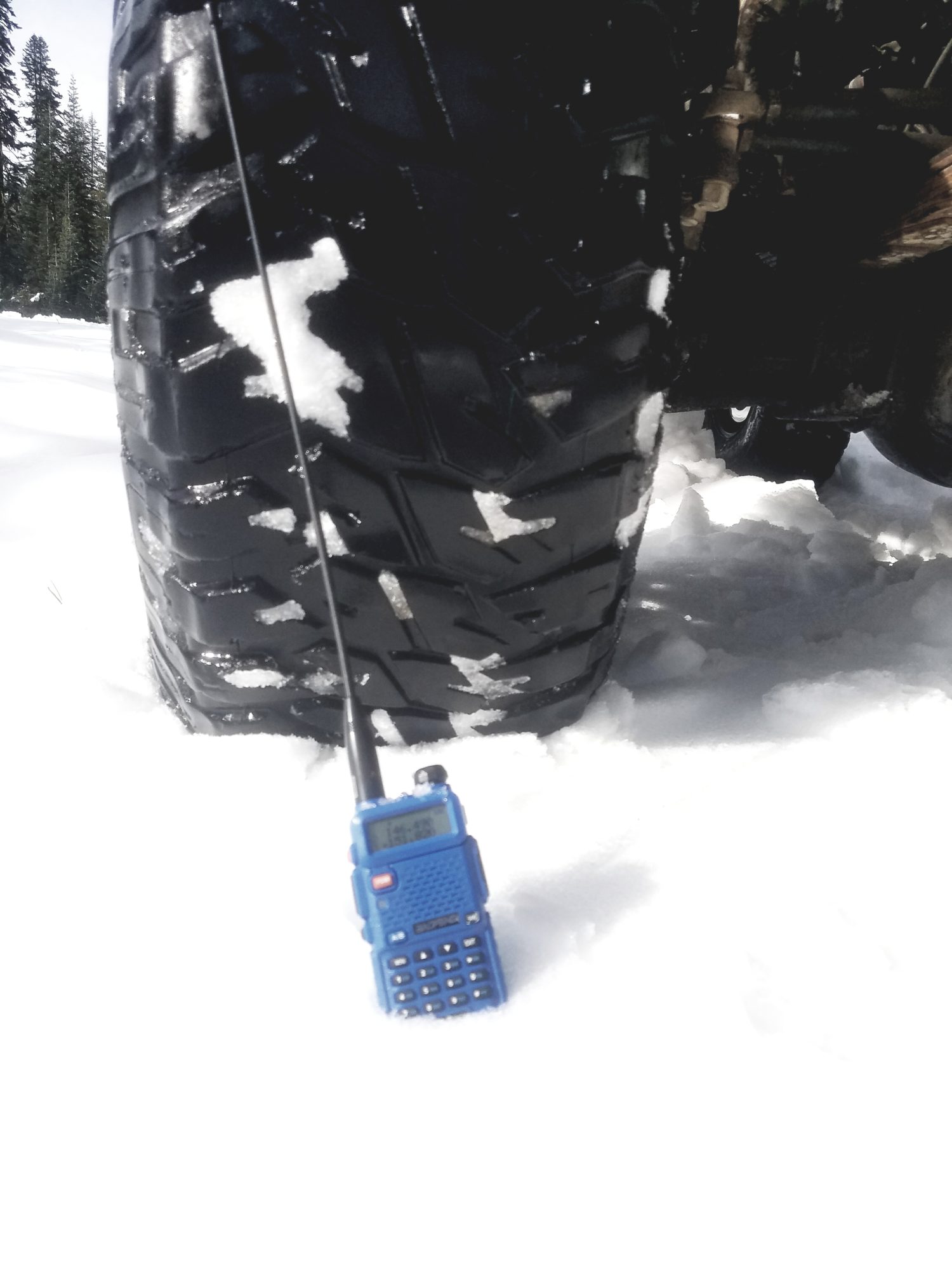 MURS runs in the 2 meter band of the radio spectrum (151.820 to 154.600 MHz) (just remember the 2meter part). GMRS and FRS lie in the 70 centimeter band, and share most of their frequencies. Ham radio can operate on all sorts of bands. The most common on the west coast for backwoods communications is the 2 meter band. There is a large following of off road hams on the east coast using the 6 meter band.

A band refers to the wavelength of the radio wave. So a radio frequency in the 2 meter band, is going to have a radio wave of 2 meters (~6 feet long). The 6 meter band would be 6 meters long (~18feet). And the 70cm band has radio waves of 70cm long (28 inches long). Why does this matter? Because shorter waves penetrate trees and bushes better, but they don’t bend around objects very well like ridges and mountains. They are very straight line. Longer bands can still penetrate bushes and trees well, but they do much better at bending around objects, get down into valleys, over the tops of hills (thus the following of hams getting more into 6meters on the east coast).

So, in terms of backwoods effectiveness, MURS does okay, ham does best. In terms of flat ground plains or deserts, GMRS and FRS would do better than MURS, but ham would still do best for the next reason… 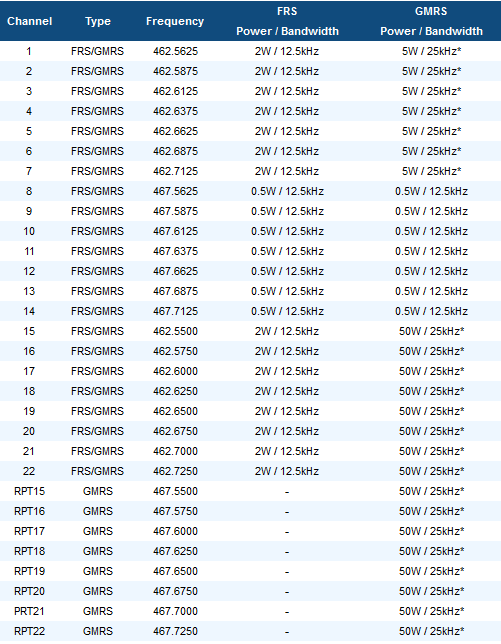 In the immortal words of Tim Taylor, “MORE POWER!” In order to get shorter wave frequencies to get through objects better, you need to run more power. MURS has 5 channels, capped at 2 watts of power on the 2meter band. You don’t need a license to operate with a MURS handheld or on MURS frequencies, but you do become severely limited in range due to the 2watt limit. But for talking vehicle to vehicle, or keeping track of your buddy while hunting, it works great! You can usually get a solid 1-5 miles of range depending on the terrain.

GMRS and FRS are tricky because they use most of the same frequencies, but have different acceptable power levels depending on if you have a license or not (you need a license for GMRS). The FCC just, in 2017, restructured how GMRS and FRS work and overlap, so it is quite difficult to explain it. Take a look at the above chart to see how each works. GMRS can do 5 watts, ½ watt, or 50 watts depending on what channel you are on. FRS is limited to 2 watts or ½ watt depending on the channel, but is also unlicensed.

Ham radios are capped off at 1,500 watts on most frequencies. Most ham radio handhelds run 5 watts or 8 watts. Most mobile ham radios will run 50 watts, some go up to 75 watts, and there are a couple of mobile radios that will do 100 watts.

So, in order of shortest range to longest range, you have FRS, MURS, GMRS, then Ham Radio. 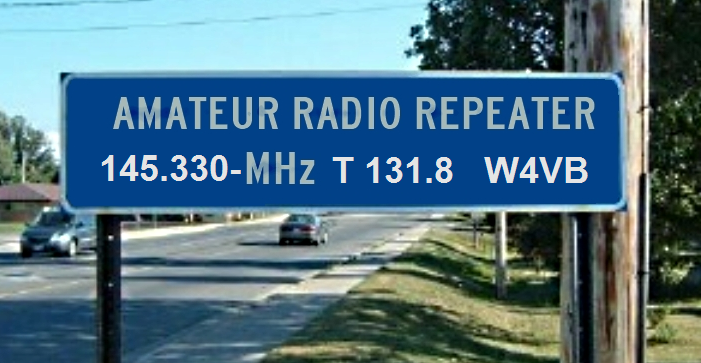 The last big difference between all of these types of radios is their ability to use repeaters. Repeaters are essentially computer controlled radios. They are usually situated up on mountain tops or ridges, and transmit at higher powers. This allows signals that repeaters transmit to go much further… sometimes upwards of 300 miles. What makes repeaters magical, is that they take an incoming signal, and repeat it out for you, automatically, at the exact same time that you are transmitting. So, it’s just as if you were up on the mountain or ridge, transmitting at higher power, but you are actually down in a valley, talking on your 5watt handheld.

On most repeaters, there will usually always be someone listening. And since ham radio is designed for emergency situations, if you can get ahold of someone on a repeater, chances are, they will bend over backwards to make sure you are okay. FRS and MURS suffers from not being able to use repeaters. GMRS can make use of repeaters, but they are limited to 50 watts of power, and not very many people setup GMRS repeaters, since there are so few people that actually use GMRS.

Ham radios excel in this category. In California alone, there are over 2,600 ham repeaters. So, if you get stuck in the backwoods, or come into an emergency situation, your chances of survival and making it home safely are exponentially increased with ham radio.

So What Exactly Are Race Radios?

Simply put, “Race Radios” are just commercial radios that are pre-programmed with the business frequencies that the race teams at King of the Hammers uses for their pit crews.

In other words, they are limited use PLMR radios. Which means, you need to have a commercial license that explicitly gives you permission to be using any 1 of the 20-30 channels that come pre-programmed on race radios. It is illegal to use these without that license, even if you have a ham license (amateur radio operator license).

The caveat to race radios channels, is that not only do you need to have a license that states you have permission to use that frequency, but the license must also say over what geographic area you are allowed to use it. Because there are thousands and thousands of businesses all over the country that depend on their radio communications for their business, they will share frequencies, but be in completely different areas. So a tow company in Northern California might be using the same frequency as “BFGPITS”, which is reserved for the BFG Race Team in the 75 mile radius of Johnson Valley. So, just because you have permission to use BFG’s channels in Johnson Valley, does not mean you can legally use them outside of Johnson Valley.

So, unless you actually use the radio within the 75 miles of Johnson Valley, you are probably going to be operating a “race radio” illegally. We have talked with a certain company multiple times at events, and on the phone about this problem, and they seem to not care that they are setting up their customers for a $10,000.00 fine from the FCC.

Please do not purchase “Race Radios” unless you intend to be using them as part of an official race team with the required licenses for those frequencies, in whatever area you will be racing. Otherwise, you are now knowingly, and intentionally disturbing businesses made up of people like you and me, who depend on their business and radio communications to feed their families. Please stick to ANY of the other radio services!

In the end, all of these options are going to work well, depending on what you are trying to do. If you just want to talk vehicle to vehicle, a 2watt FRS or MURS setup, with an antenna on the outside of your vehicle, would work just fine.

GMRS would be your next best option, but you will need a license ($70 with the FCC) to use, and you won’t be able to make use of repeaters in emergency situations, as there aren’t really any repeaters setup outside of cities or metropolitan areas.

Ham radios are still your best option for off road communications. They operate on multiple frequencies and bands, they operate at higher power, they make use of repeaters, and the license is only $15 with the FCC. You could take our online Ham Radio class, AND get your ham radio license for cheaper than a GMRS license.

Check through some of the above radio options for each type and see if you find something that works for you!