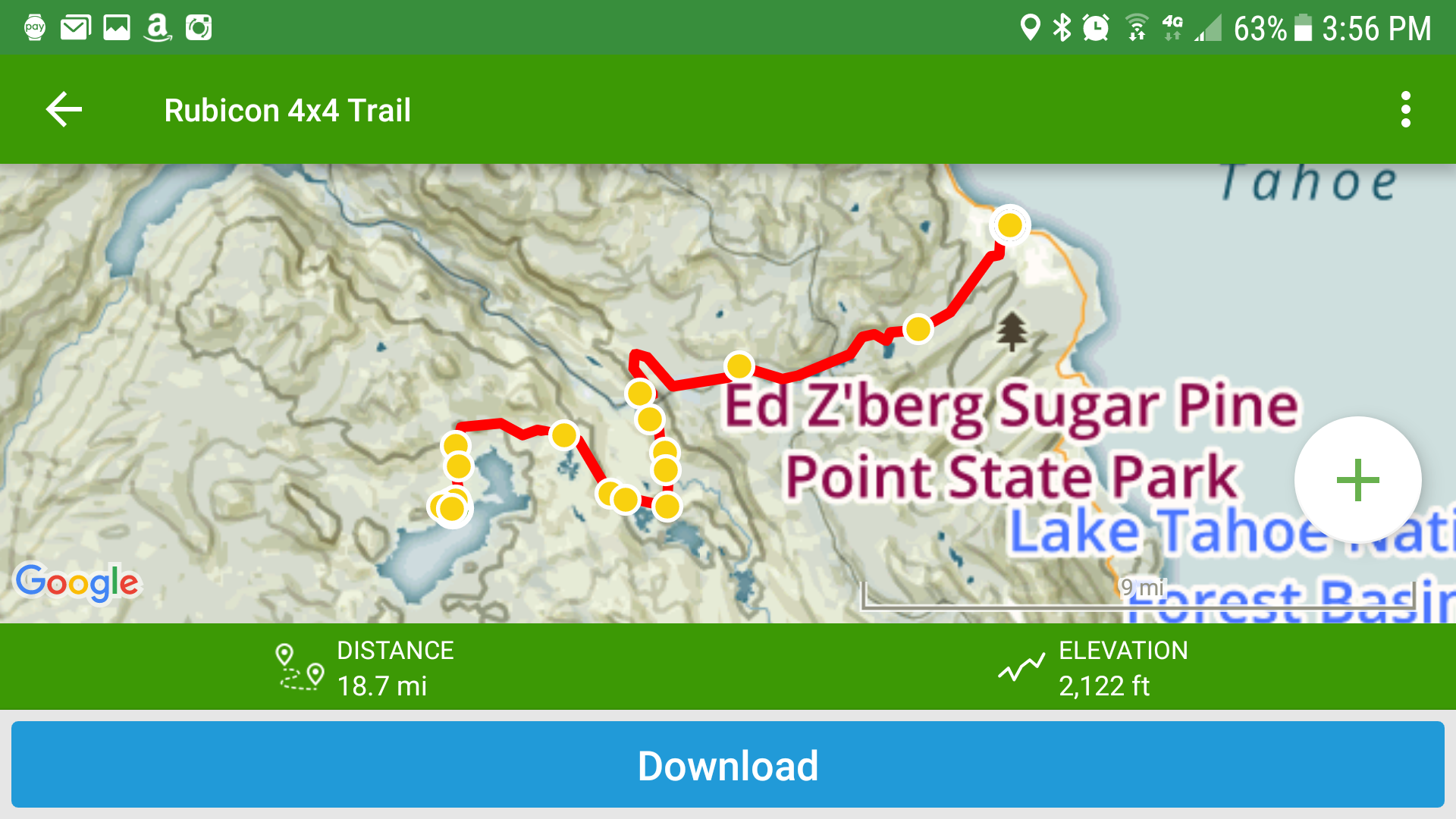 We Tried Out Some GPS Map Apps On The Trails! Combined With Our Ham Radios, They Were Pretty Awesome

We have been a huge fan of map and gps apps that work without cell reception. This allows us to explore in the backwoods and always know where we are at, what’s around us, and how to get home. Combined with a ham radio, you can get just about anywhere, and be confident that you will make it back home. If you haven’t gotten your ham radio license yet, check into our online ham radio class. When it comes to our GPS map apps, we are always on the lookout for new apps that can help us while away from cell reception. Below are some apps that we have tried on Android, and what we thought about them.

Not a big fan of the UI. A few of the trails I looked up seemed incomplete. For instance, it says Rubicon is only 3 miles long, and I couldn’t figure out how to get it to navigate me to the start of the trail. The map isn’t crisp and clear. There were a few reviews saying the app wouldn’t close on their phones. It closes just fine on my Galaxy S7

I have started becoming a bigger and bigger fan of this app. There were a bunch of trails on it, including Rubicon, Fordyce, Slick Rock, Deer Valley, Hellhole. Almost all of them have awesome waypoints along the trail with a tidbit about the waypoint… such as description of little sluice, big sluice, where nice campsites are on the Rubicon, etc. I really liked the descriptive waypoints. This is one feature I haven’t found on any other GPS Map App yet.

Another feature I have liked about this app… is when I go somewhere out of state and want to find an activity to do, it is very easy to search for trails near you based on your gps location and what criteria you are looking for (jeeping, hiking, horseback, dog friendly, camp sites, etc). I have used it while staying in Colorado before for hiking outside of Estes Park. Great functionality, great UI.

I am just not sure if it is worth $30 yet compared to other apps out there. But so far, this is the most inclusive app. If I did more travelling to places I was unfamiliar with, I think it would be well worth the 30$.

Our big grief with AllTrails, is that it does not use MVUM, USFS or even USTOPO maps. It uses some sort of Topo map that only really has main roads and highways, other than the main trail you downloaded. So, if you get lost without cell reception… you ONLY have the trail that you downloaded, nothing else. This means you have to stick to the route and GPS tracks given. This does not allow very much ability to explore and get lost… Which we LOVE doing.

Now free to download. You can get MVUMs free. The maps are nice, clean, and crisp, with all of the roads very clearly marked. You can buy the USFS Visitor maps for $4.99 each. You can record your track, set waypoints. If you get lost, you can easily find your way back to wherever you want to be. 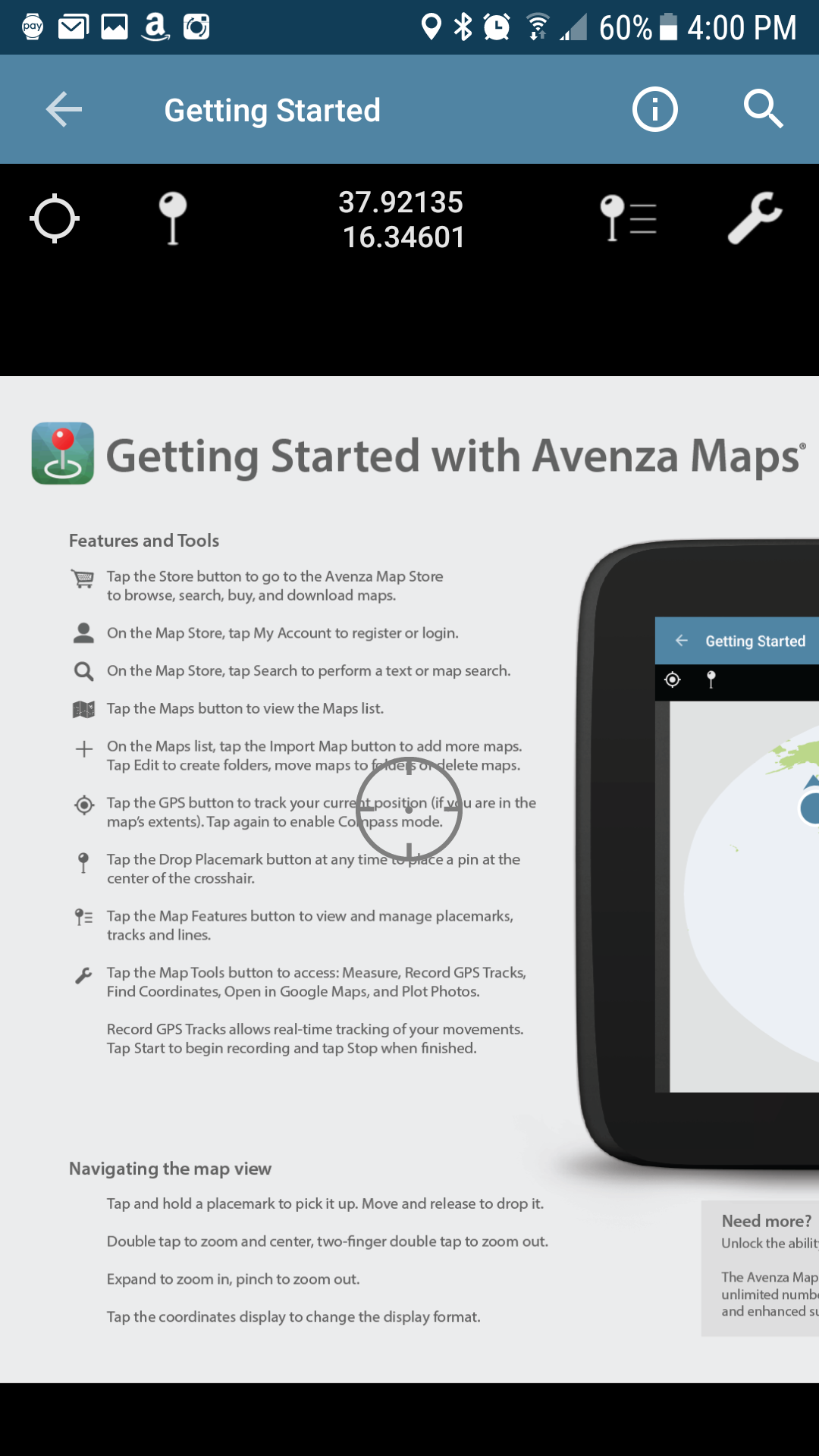 Our huge issue with this app is that everything is based on pre-set maps and tiles. If you drive to the edge of a map and need another map brought up because you left the area of the first map, it cant load the next area for you based on your coordinates. You have to manually find the next area… which can be a pain in the ass as the maps are labeled “El Dorado Front District” …. like seriously… what does that mean geographically???!! If you get used to each map, I can see this being great for exploring.

Unfortunately, MVUMs do not tell you where towns, cities, campsites, smaller lakes, etc are. A lot of things are not labeled. But every single road is labeled… in USFS road names (29N41Y). So, bigger roads are not labeled the way I already know them (Eagle Lakes Rd, Iron Mountain Rd., Forest Hill Rd, etc). Rather, they are labeled in the USFS numbers, which we don’t have memorized, and probably never will. So we constantly found ourselves getting lost. We knew where we were on the map, but due to lack of landmarks on the map, and lack of cities and other things, it did us no good to actually tell us where we were.

Another issue with the MVUMs I have found is that, the 2 trails I looked up, are right on the edge of the MVUM (Fordyce, and Hellhole). This created the problem of trying to manually find the next map because I would end up going off the first map. Also, there is no way to navigate long distances because if you are not on the map that you are looking at, the app doesn’t know where you are.

The USFS Visitor maps do have everything labeled (campsites, rivers, lakes, little towns, USFS roads, trails, etc) and I would hope they work quite well. I have full sized JPGs of the California Forests (which looks the same as the USFS Visitor maps that Avenza has access to). I just don’t know if Avenza loads the ENTIRE map at once, or if it loads in tiles.

The old version of Avenza that my uncle has loads in tiles… which creates the problem of having to manually find out which map/tile you are on. In order to test this, I would have to buy one of the maps for 4.99 and test it out… which may be worth it. I will think on it lol

The app I currently use. the free version gets you almost every feature of the app except offline maps. For testing purposes, I have just loaded the map area of the trail I will be going on before I lose cell reception. Then, just don’t close down the app until I get off the trail and dont need it any more.

It has google maps and US Topo maps free of charge. It functions much like google maps app does, which makes it a very familiar UI experience. It will do navigation of any distance. Record GPS tracks, and you can upload and download from different map communities (GPSies, DropBox, etc). So you could put MVUMs on it, or USFS visitor maps. It has a built in altimeter and compass. And it also takes a bunch of neat statistics of your recorded GPS trail.

The thing I really like about this map is that it loads based on whatever zoom level you are at. So, if you go off of a loaded tile, the app automatically loads the next tile for you, so that you always know where you are (which is the whole point of a map app, right?!).

The US Topo maps don’t have stuff on them like campsites and hiking trails… but almost all MVUM roads, lakes, rivers and major roads are all there and labeled. One bonus is, mountains and peaks are labeled as well… I took it out and spent about 30min on top of Signal Peak figuring out what all of the lakes and mountain peaks in sight were, and then, how to get to some of them from Signal Peak. 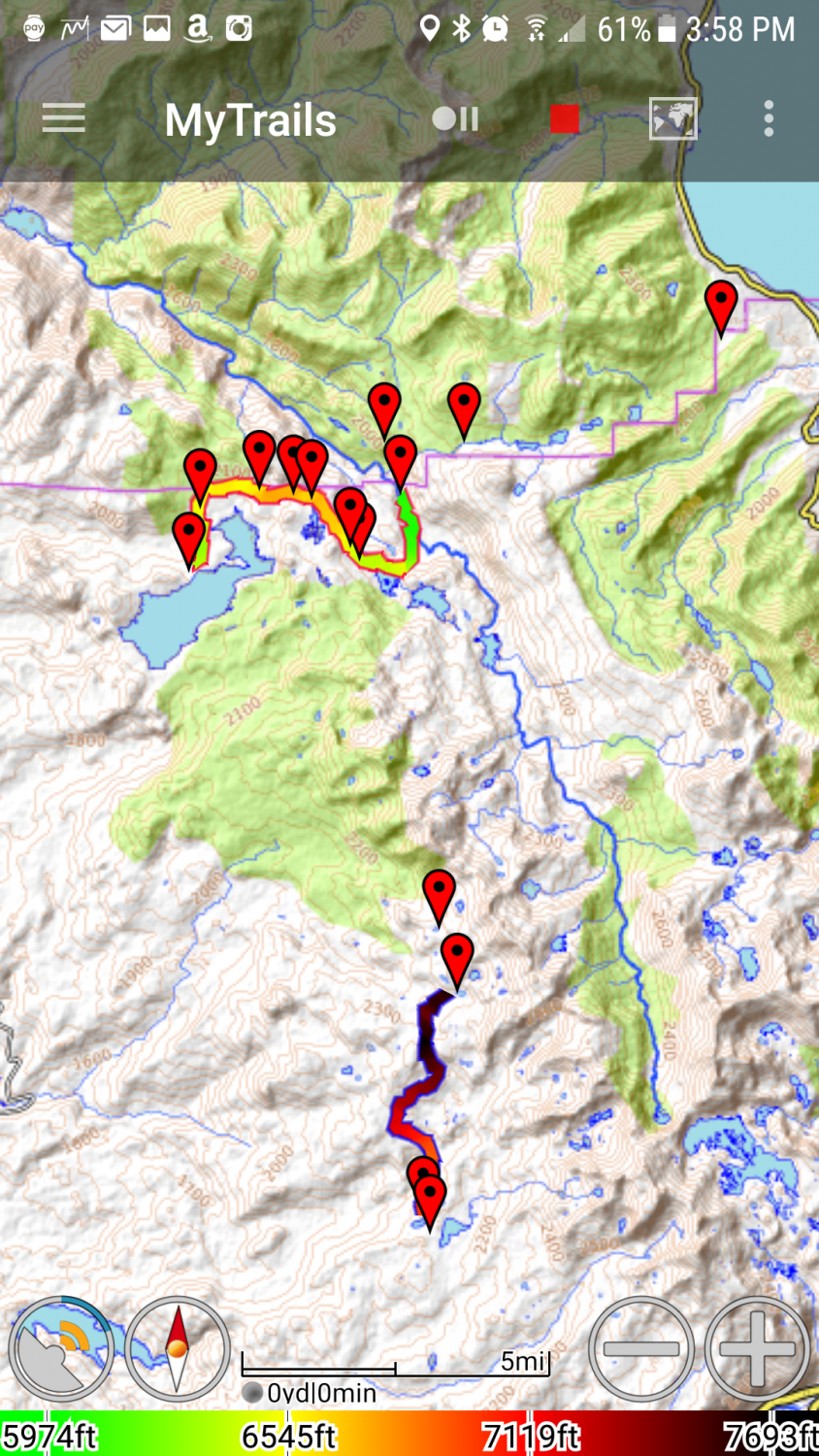 For $2.50 USD you get the full service pro version, which allows for unlimited map downloading and seamless DropBox integration. This includes the MVUMs, USFS Visitor maps, and any other maps you might want to upload into the app.

So far, this is still my favorite app after trying the others, and the $2.50 is WELL worth it.

Bonus… the developers state that your original $2.50 will get you all future updates free of charge.

Another feature that I have found hit or miss, but pleasantly surprised when it works… is the search function. You can search for a campsite name (for example, Cleghorn Bar), and it may not show up on the map, but the app will place a waypoint on the GPS coordinates where that campsite is. Don’t ask me how it knows where the campsite (or lake, or river, or mountain, or pass) is, but every time I have double checked it, the app has been correct.

UPDATE! I purchased the pro version… and it is now my go-to choice for map apps. No questions asked or hesitation. Most of the trails you will find in the M.O.R.R. Off Road Trails Maps sections of the website were recorded using this app. I love it and do not plan to switch away from it any time soon.

The app has a couple of really nice functions for offroading. You can customize offline areas and download them to your phone free of charge. It uses its maps though… so only more trafficked trails will be on it. I have come across quite a few trails that have not been on google maps. But once you download the offline area, it will automatically update itself once per month. So, if google adds a trail within the area you downloaded, it will automatically show up. You just gotta check on it before you leave your house. 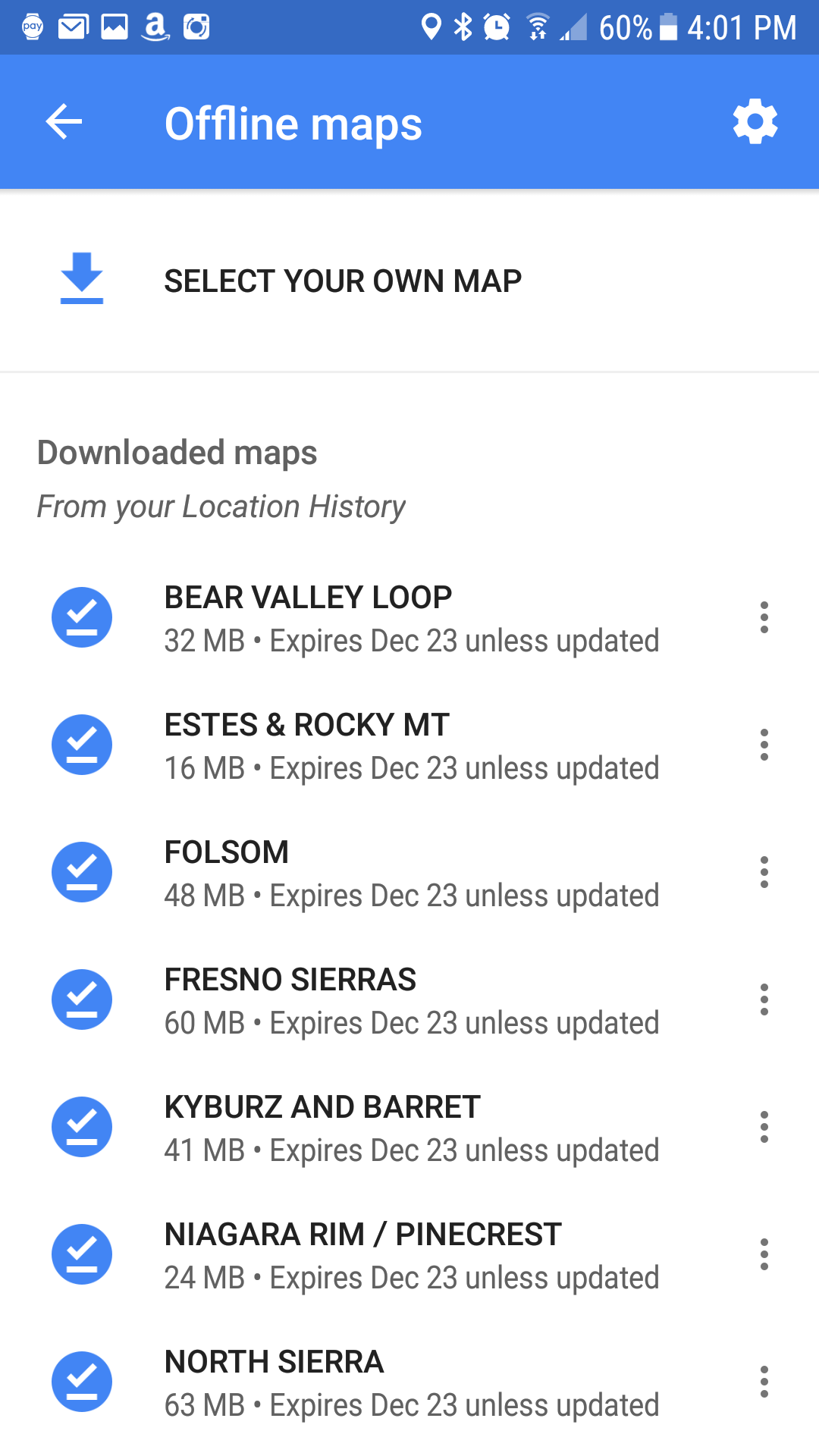 The REALLY nice feature of google maps that I use every single time I go out offroading, is the “Share Location” feature. This function works much like waze and iphone maps does… you just have to have data service to use it. Very nice for meeting up with others before hitting the trail… especially if you use it in conjunction with a ham radio.

My uncle and I use this method every time we go wheeling. No more wasted time at a meeting spot, we just meet on the highway! I also use it to tell my girlfriend that I am okay and on my way home once I get off the trail. She appreciates it a lot.

With phone hard drive space pushing 64 gbs nowadays, you could easily download your entire state into offline maps for free. For California, we found that you can download the entire state in roughly 9 sections. For a nice, square state, like Colorado, you could probably get the entire state in 1-2 sections. It will take up a good chunk of your phone’s memory, but the likelihood of you making it home because you know where you are, goes up exponentially.

Those are the GPS Map Apps that we have tried out! We have found that combining a GPS Map App, and our Ham Radios, it is much easier to go on solo adventures and ensure that we still make it home safely. Leave a comment below and let us know which GPS Map Apps you prefer!