The Abandoned Iron Mountain Ski Resort… In the Storm! 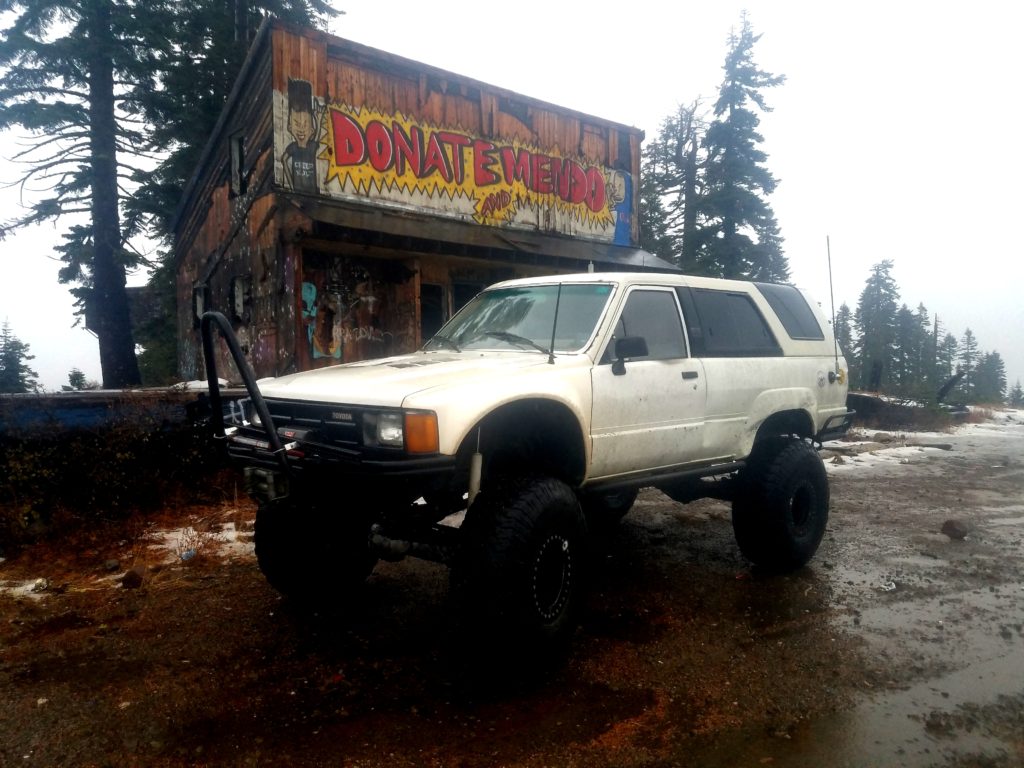 The Iron Mountain Ski Resort has been a destination that we have been wanting to go explore for a while now. We keep hearing about it from locals, from people who used to ski there, and from general heresay. We say “used to ski there” because it has been abandoned since the 90s. We do a lot of snow wheeling up in this area during the winter, and have never seen the resort! So, when a big storm rolled through the area, we decided to set out on an adventure with our ham radios, and find the ski resort… and hopefully some snow!

Before the Hamventure, A Little History and Info… 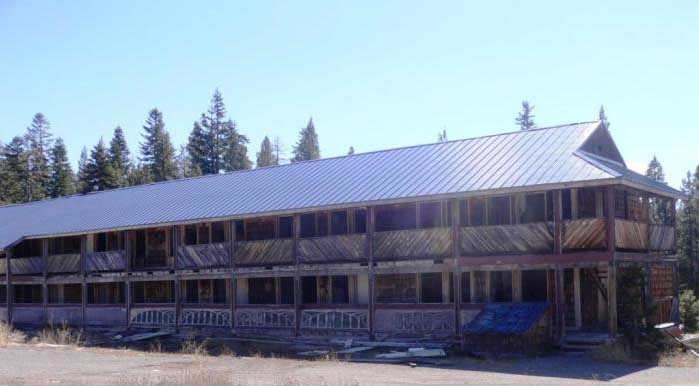 The 1,700 acre ski area was founded in 1970. It was then the Crystal Basin Ski Area. Over the course of almost 30 years, the resort had a series of bankruptcy issues. The property was finally sold and handed over to Iron Mountain Acquisition Company, who then sold the property to Sierra Acquisition Co in 1998. The following year, Sierra Acquisition Co. went under and La Montana picked up the acreage with intent to rebuild another ski resort. El Dorado National Forest has since refused to issue a permit for the space to be used as a ski resort again due to wanting to see if the space could be used in better ways for the public. And, to this day, it is just remnants of what it used to be. The lodge is no longer there. The ski shops are still around, the lifts are there, parking areas are still cleared, and slopes are still barren.

And Now Back To The Adventure! 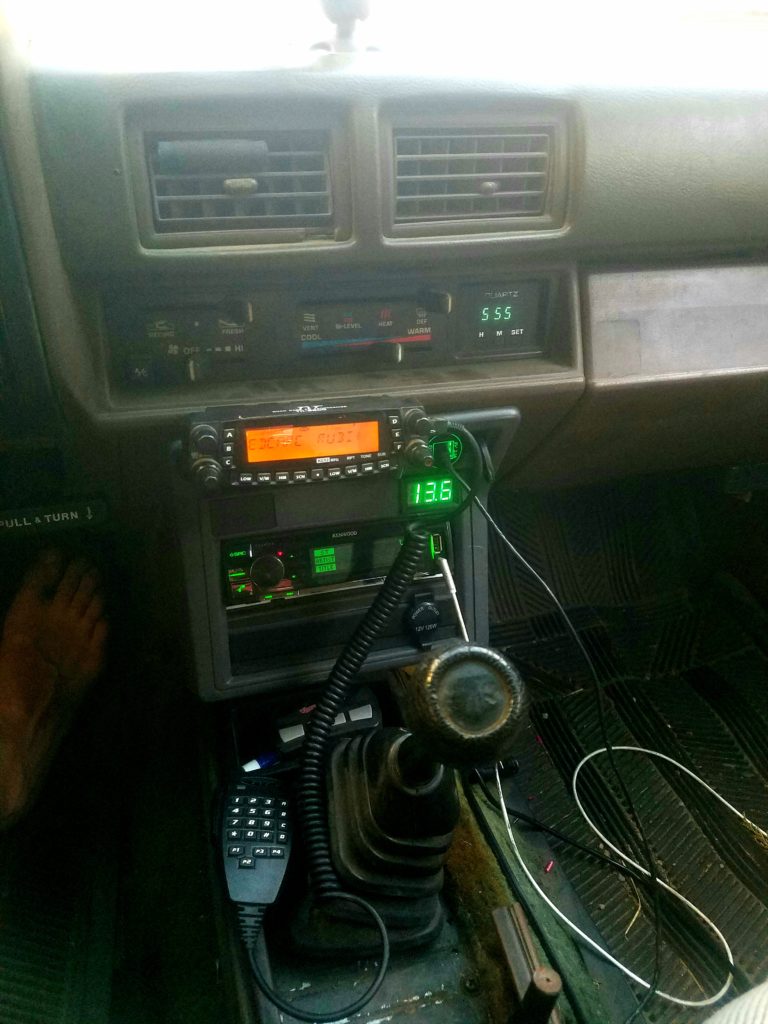 Like I was saying… we love snow wheeling! So, to give our best chances of finding snow, we waited until the middle of the storm to head up to the 7,400 ft elevation that the ski resort is located at. Well, we definitely caught the middle of the storm. Unfortunately, it was only about 38-39 degrees, so it was just warm enough to force a torrential downpour… but just cold enough and windy enough to make it miserable to walk around. There was about 1inch of snow left on the ground from a previous storm, which very quickly turned into 3 inches of ice cold slush everywhere. Not to worry though, because we always have a small fleet of ham radios with us. So we grabbed one of the Baofeng UV5Rs with the Upgraded Nagoya-771 Antenna, and switched our TYT TH-7800 mobile ham radio to crossband repeat and set out to explore the area. This radio combination is one of our favorite setups… the Baofeng radios are only 25$ on Amazon, so if we destroy one in the downpour, we can just order another one. Combined with our 15$ Nagoya Antenna, we can get easily a 3 mile range back to the mobile radio in the RunnerCrawler, which then repeats the signal out to our repeater for an additional 100mile range. So, if we took a spill and fell down one of the ski slopes, I could still get ahold of someone right away. 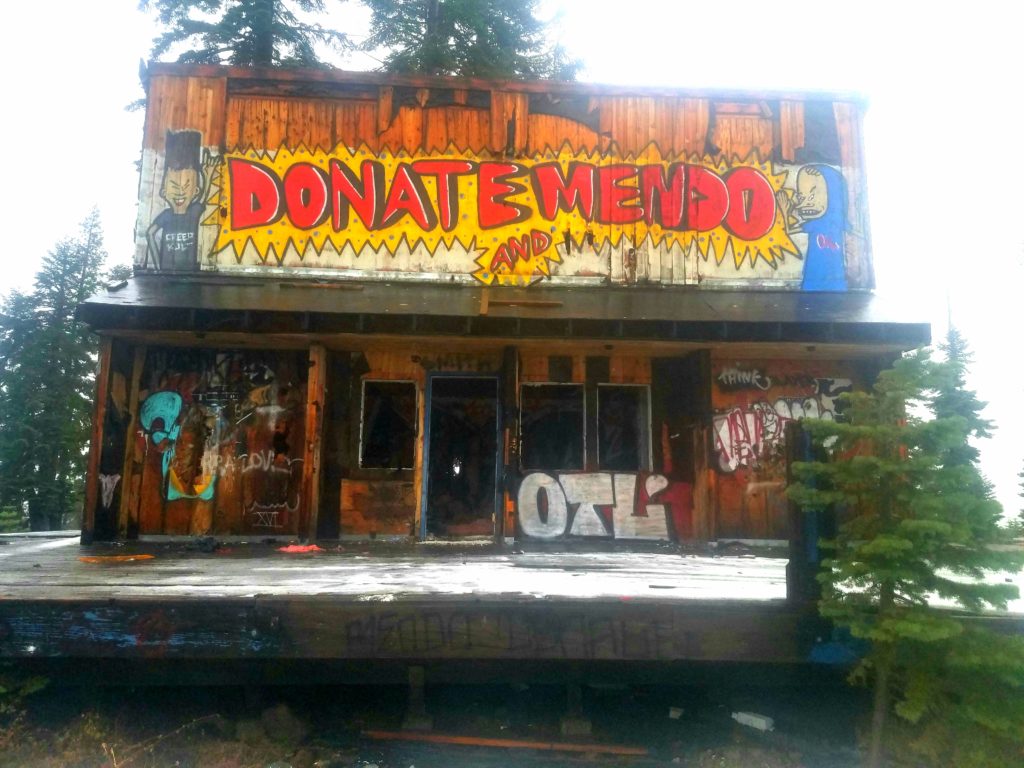 The first place we went to check out was one of the smaller buildings. There are only really 2 buildings are still semi intact. And, for being abandoned since 1995, and going through harsh winter after harsh winter for 22 years, I didn’t think it looked too bad. It was more damaged from people than it was the elements. Before going up, I had read that there were still old skis and ski boots littered around the ski shop. I really wanted to find some and get some good pictures, but I couldn’t find any. All I found was insulation, beer bottles, torn down drywall, and all sorts of other non-interesting stuff. The outer deck is still in pretty good shape and doesn’t creak or give when you walk on it. The staircase leading upstairs, was a different matter though. They looked like you would get tetanus from being within 1 foot of it. This abandoned building was cool, but more than anything, it was a relief from the howling wind and slightly-warmer-than-ice rain outside. I found myself thinking “This is surprisingly sheltered from the elements… I would take shelter here if I needed to while hiking in a storm.”

The next building looked more like a shop or food place of some sort. This one had been more heavily torn apart by people than the first one. There was debris strewn all over the ground behind it. It was a little smaller in stature than the first building, but had a much better view through one of the walls! If there were only some windows on here, I could see it being a nice little mini mountain weekend cabin.

After checking out the first two buildings, I decided to suck it up and head out into the elements and explore some of the other interesting options around the area. My first stop were the 2 lifts. They were still standing, and in rough shape, but looked pretty cool in their current state. There were no more cable cars that I could find, which was disappointing. But, I did get a nice greeting from Squidwerd!

There was also a massive building that looked either collapsed or burned down. I am assuming this was the main lodge or dorms for the overnight ski trips. I don’t recommend walking around on this deck… there were rusted nails sticking out everywhere, and multiple spots where it had collapsed. When I got back home, I did a little more research and found some pictures of what the lodge used to look like! Pretty impressive! I wonder when it got reduced to its current state? 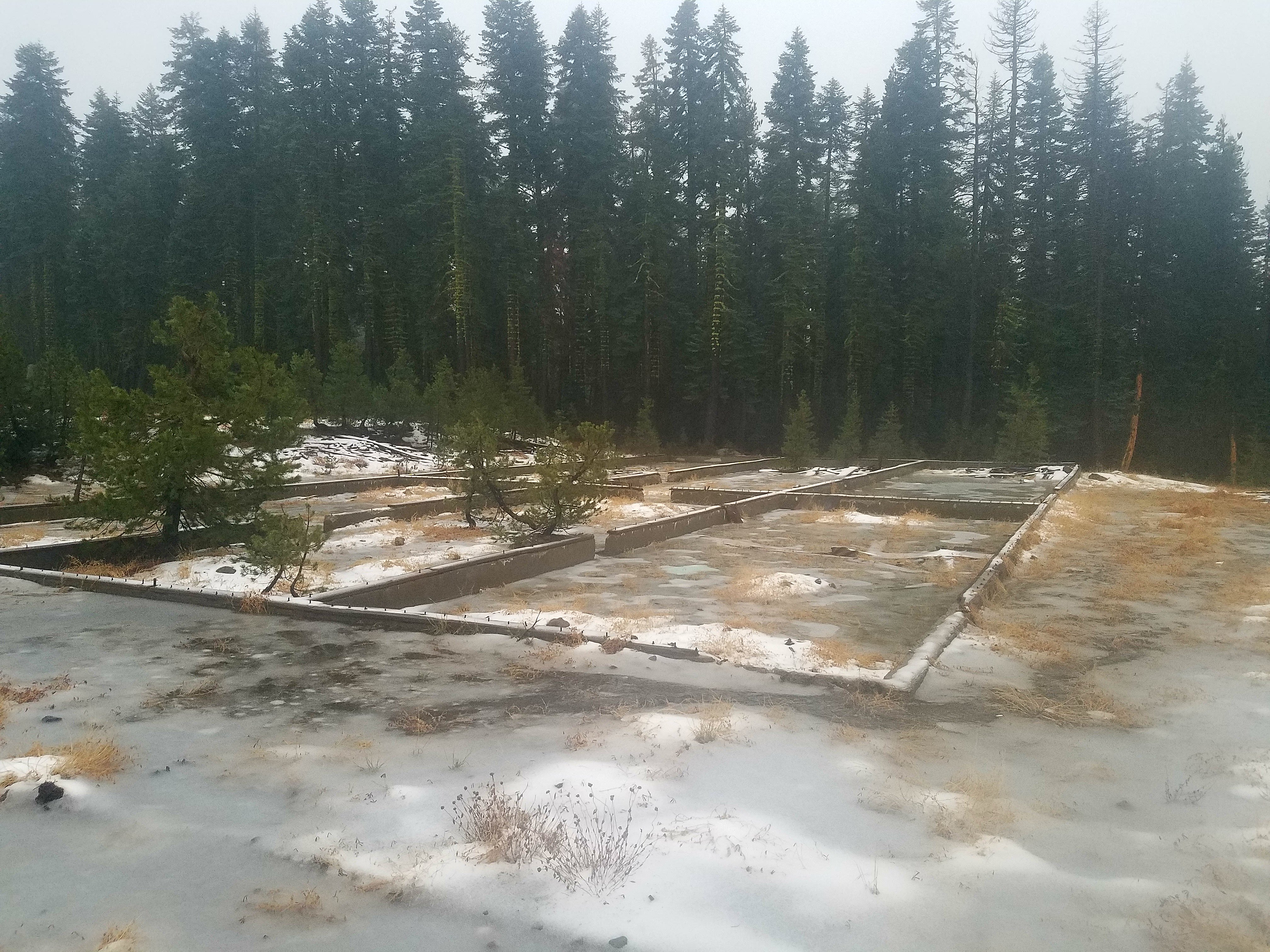 Off to another side, tucked into the tree line was a huge, cleaned up area. It was obviously the foundation to a good sized building. What drew me over to it was that it was so clean. There wasn’t debris littered and strewn all around like all of the other building sites. By this time, my hands and fingers were starting to fall off because I wanted to get some good pictures for YOU GUYS without wearing gloves… That’s how dedicated I am to our visitors! Because my hands were about to fall off, I decided to not walk around the foundation, and instead ran back to the RunnerCrawler to cower from the storm.

One of the coolest parts of the Iron Mountain Ski Resort, is all of the graffiti everywhere! It is amazingly vibrant and colorful for sitting out in the elements year after year. Ghost towns are fascinating to me. The story as to why an entire area was just left abandoned is usually something to get lost in. An abandoned ski resort? Just as good! 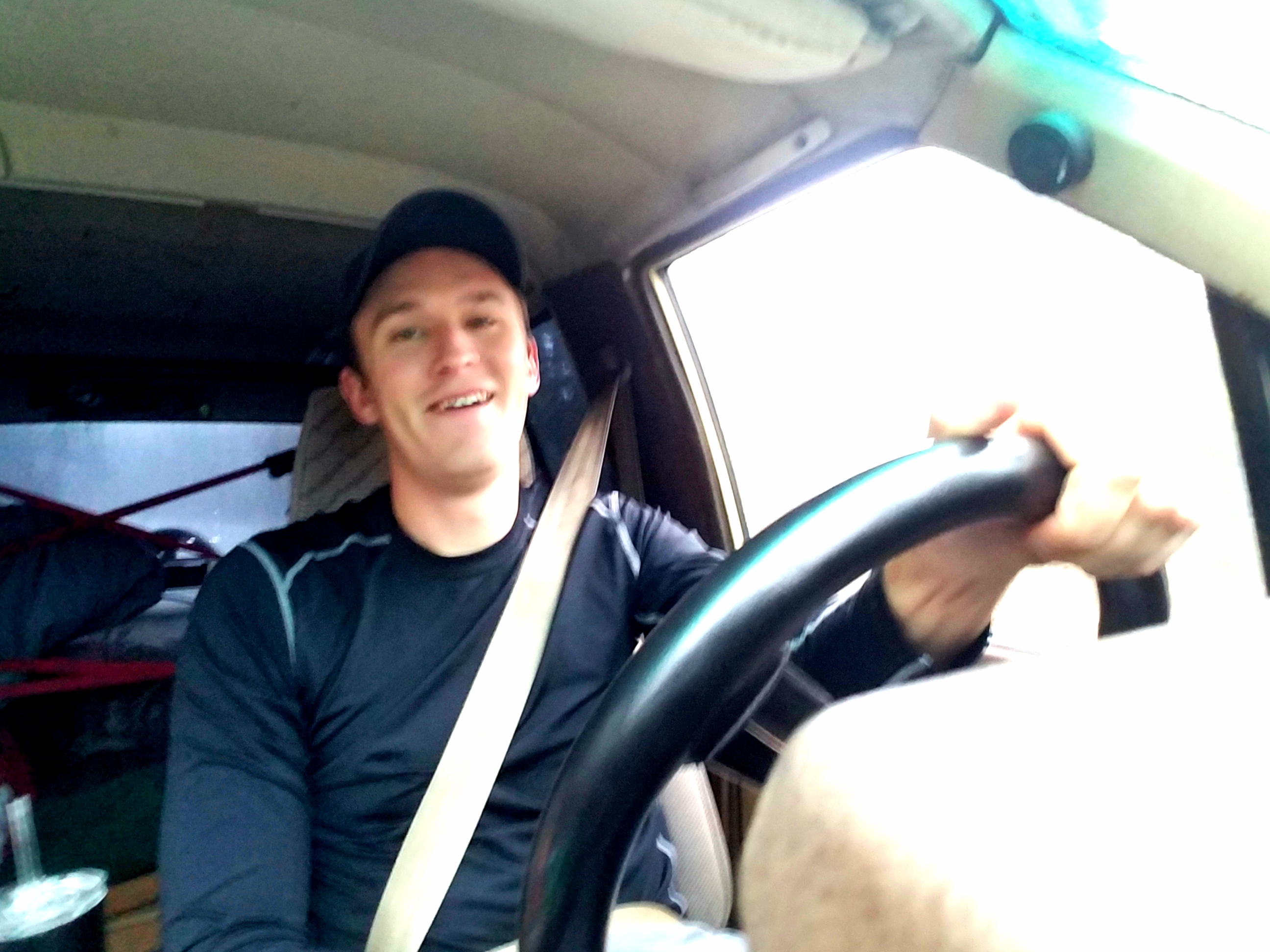 Thank you to wikimapia.org for the history and info on the area!