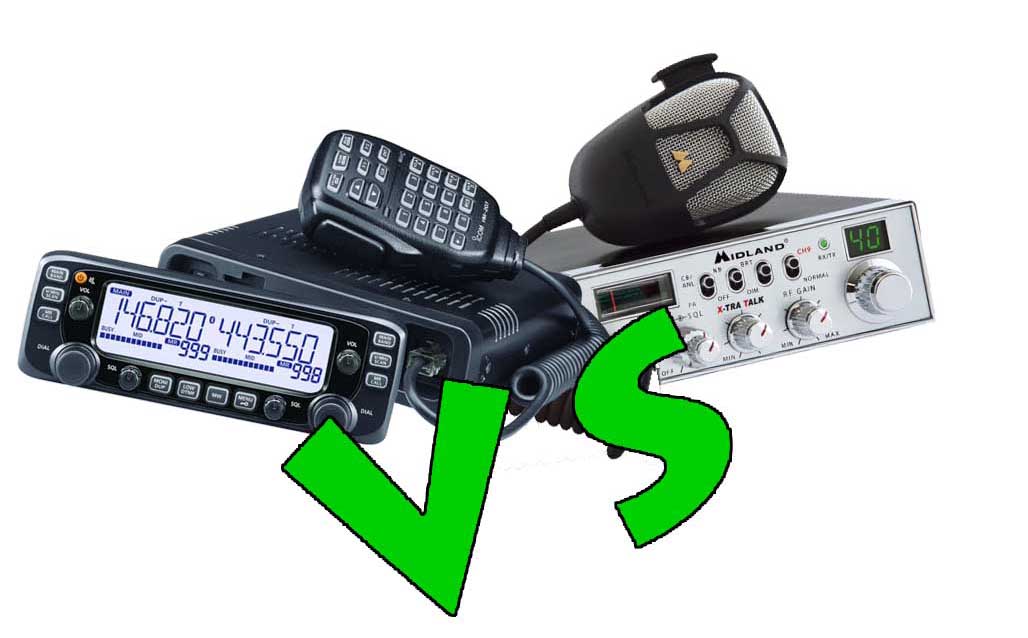 What’s The Difference Between Ham Radio vs CB Radio?

Being pretty involved with 4×4 communities across NorCal, I see a lot of the same questions and curiosities pop up regarding ham radio. One of my favorite ones to answer is the Ham Radio vs CB debate.

Ham radio is relatively new in the off roading scene. Off roaders have been using CB for a very long time. This is mostly due, in part to the prevalence of CB in the 60s and 70s.

The History of CB Radio vs Ham Radio 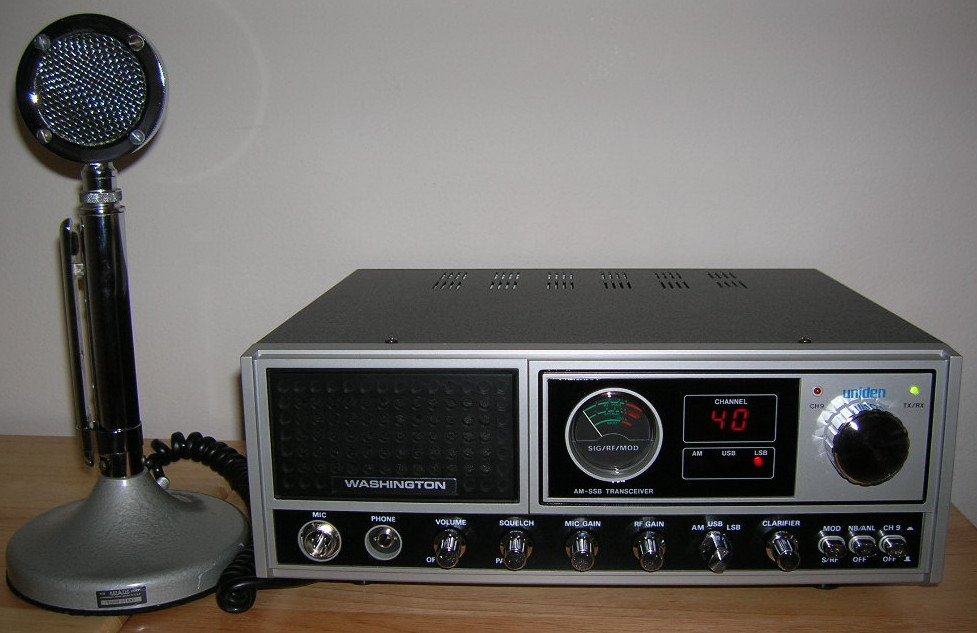 Also in the 70s, VHF and UHF radios were too costly for the average consumer. This made most people who wanted “wireless communication” get into CB.

In the height of CB, there were 40 frequencies allocated to the cause. These 40 frequencies were channelized to make frequency usage easier, simpler, and more likely to be used correctly. However, with literally millions of people being crammed into just 40 channels, anonymously, it only brought out the worst of everyone. Much like the issues we have today with the internet anonymity.

Because it was designed as the “poor man’s business communications” by the FCC, it was readily available for anyone and everyone to use. And since cell phones weren’t invented yet, and VHF and UHF radios were too expensive, CB communications quickly became the status quo for off roaders. 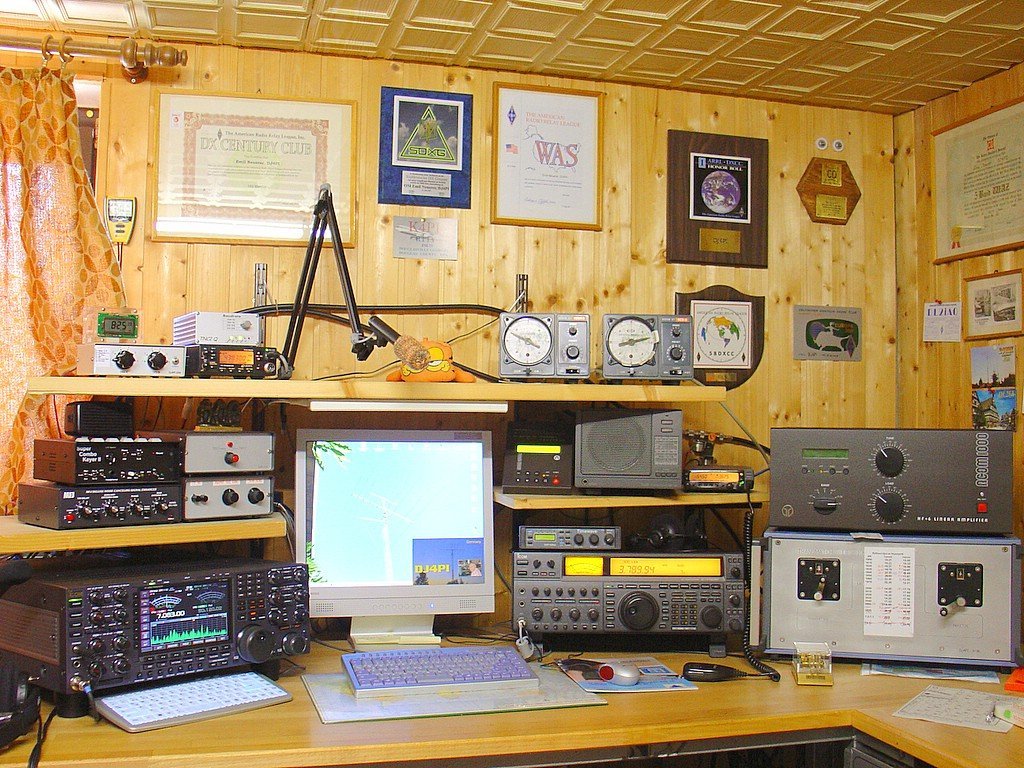 Ham radio has literally been around as long as radio waves were first invented by Heinrich Rudolph Hertz in 1888. But it wasn’t until after WWI that ham radio started to become popular.

Up until 2005, there was a restriction on getting your ham license. You had to pass a morse code test and prove that you knew morse code! In 2005, the FCC disbanded that restriction and made it possible for Americans to get a ham license without learning morse code.

This opened up the possibility of using ham radio frequencies for off roading purposes. Because, really, most off roaders don’t want or need to learn morse code for anything.

With ham radio becoming more prevalent, there are tons of people out there wondering why they should consider it for their trail communications over CB.

That is why My Off Road Radio is here!

CB really has become sub-par for backwoods adventures. Not only is it more difficult to setup a properly functioning CB system on your vehicle, but it is becoming a more expensive option than simple ham radio setups. Combined with CB’s downfalls, anyone who is operating CB and resisting the switch to ham radio is just handicapping themselves.

Check out the technical and practical differences below!

What Is The Difference Between Ham Radio And CB?

Most hard wired mobile ham radios operate at 50 watts. That is still 10x more powerful than your CB.

There are quite a few handheld ham radios that are bumping up the power to 8 watts and even 10 watts of power. These will run you about 50$ on Amazon. They are awesome radios, but be careful, at 10 watts of power, they will run down their batteries fairly quickly. A good quality 8 watt handheld will be a great middle of the road option for longevity vs power output.

Check out the ham radio options below! 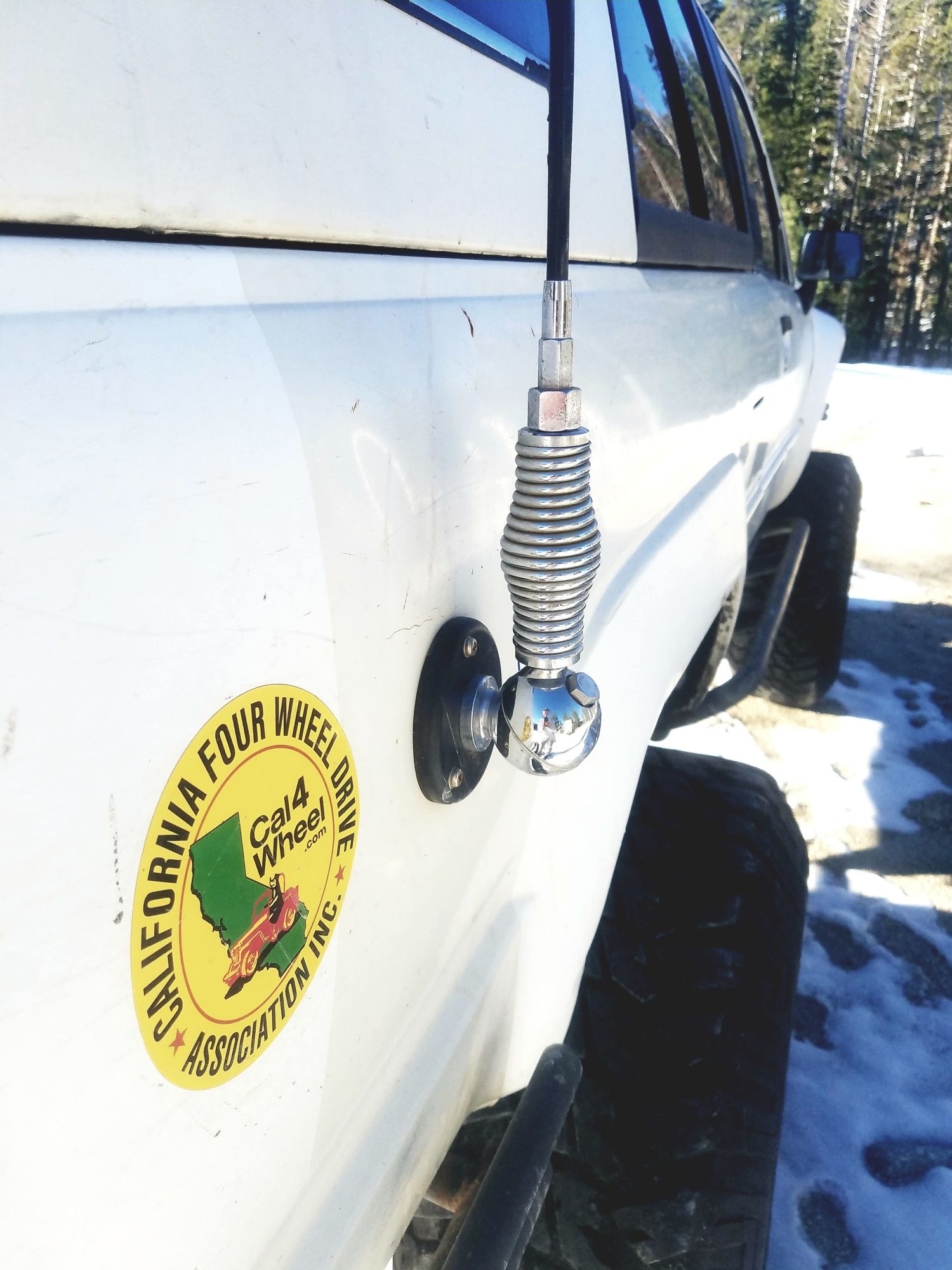 CB antennas need to be minimum 8.5 ft (102 inches) long to work well. Anything shorter and they require an swr meter and tuning to get to work properly on the range of 10-20 channels you want it to work well on.

Firestick is an ever popular CB antenna. However, they are generally around 48 to 60 inches long. So, how do they work when a CB antenna needs to be 102 inches long? Firestick actually wraps the antenna wire up around a fiberglass center. If you look at a Firestick antenna, you can see the wire wrapped up all the way to the top of the antenna.

This wire wrapping is called coiling. The more you coil an antenna wire, the fewer frequencies it can effectively work on. This means that you have to spend some more time, money, and effort to tune your CB antenna with an SWR meter.

Whenever you tune an antenna, your goal is to get the SWR (standing wave ratio) reading down to a 1:1 ratio. When you coil a CB antenna down to a 48 inch length, it will work great on roughly half of the CB channels. So, you have to choose what channel you want to tune it to. 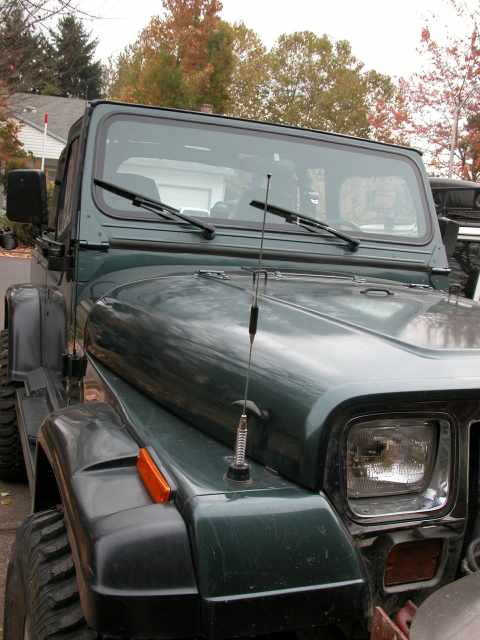 Ham VHF and UHF antennas just require a minimum length of 19.5 inches. Because the minimum is so much smaller than CB minimums, you get the full range of spectrum on VHF and UHF without having to tune the antenna. Most all ham radio antennas are good to go from the factory and do not require tuning.

We recommend off roaders to get into 37-39 inch ham radio antennas. This gives them more gain (signal aplification), and they still are shorter than most of your CB antennas. Thus you get better performance, in a less invasive space. Because of the size of the antenna, you have almost limitless mounting options for ham radio antennas as well.

Check out our article on Ham Radio Antenna Installations for Off Roaders to see just how versatile ham radio antennas can be! Since they are so versatile, it seems like almost every antenna comes with a different type of connector. So, check out our ham radio antenna installation article to make sure you have the correct connectors for the antenna options below!


SWR Meter for your CB Antenna


Ham Radio FM vs CB AM

CB uses AM, Ham VHF and UHF uses FM. Think of riding in your car and switching back and fourth between AM and FM on your stereo. The AM has a lot of white noise and static compared to FM signals. The same thing goes on with your CB.

So, for clarity sake, your ears, and your buddies’ ears, make the switch to ham radio’s FM. 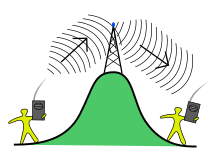 CB runs on 27 MHz frequencies. Ham VHF and UHF runs on 147 MHz and 440 MHz respectively. The higher the frequencies, the easier it is for signals to punch through objects like trees, bushes, vehicles, etc. Think of your home wi-fi router… there is a reason why more routers are switching to 5.0 GHz frequencies. The flip side to that is that it is easier for lower frequencies to “bend” over and around mountains, and down into dips and valleys. Unfortunately CB is capped at 4 watts, so it doesn’t run enough power to do that very well.

A properly tuned CB, running legal limit power, in the mountains will get you a range of roughly 1/4 mile. You might get 1/2 mile if you don’t have too many trees and hills in the way. A ham radio handheld running the same amount of power can get anywhere from 2-5 miles in mountain terrain.

Over open water, or flat lands like deserts, a properly tuned CB running the legal limit power will get you 5-20 miles. A ham radio handheld running the same amount of power on UHF can get you upwards of 50-70 miles. We have gotten our mobile ham radio, running 50 watts, to do a straight shot of over 200 miles up the central valley in California before. You just plain can’t do that with a 4 watt CB. 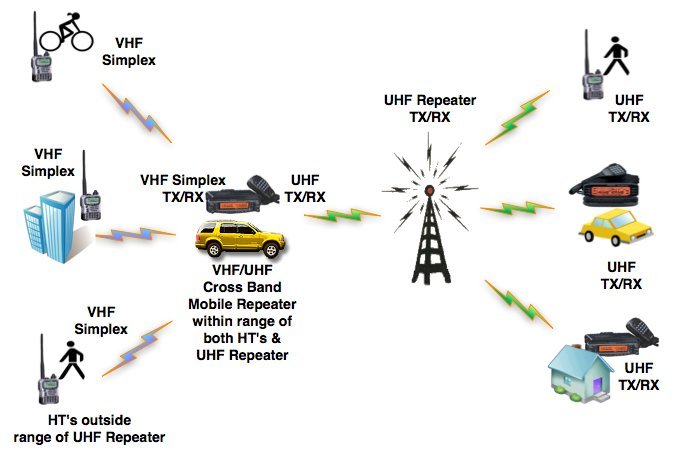 And probably its biggest downfall is that CB can’t use repeaters. Ham has repeaters EVERYWHERE. If you can hit a repeater, you can increase your range of communications up to 300 miles.

For trail communications with your buddies, using a repeater is overkill and you would want to just talk straight to them rather than use the repeater. But if you break an axle, or have an injury and need to use your CalStar, you will almost always be able to hit a repeater to call in the chopper in an emergency.

Dont think of Ham as a “trail communications”. Ya, it does that better than anything else. But it really shines in the emergency communications realm. There is a reason why pretty much every SAR team uses ham. Think of it more as an insurance policy that also doubles as your trail comms. 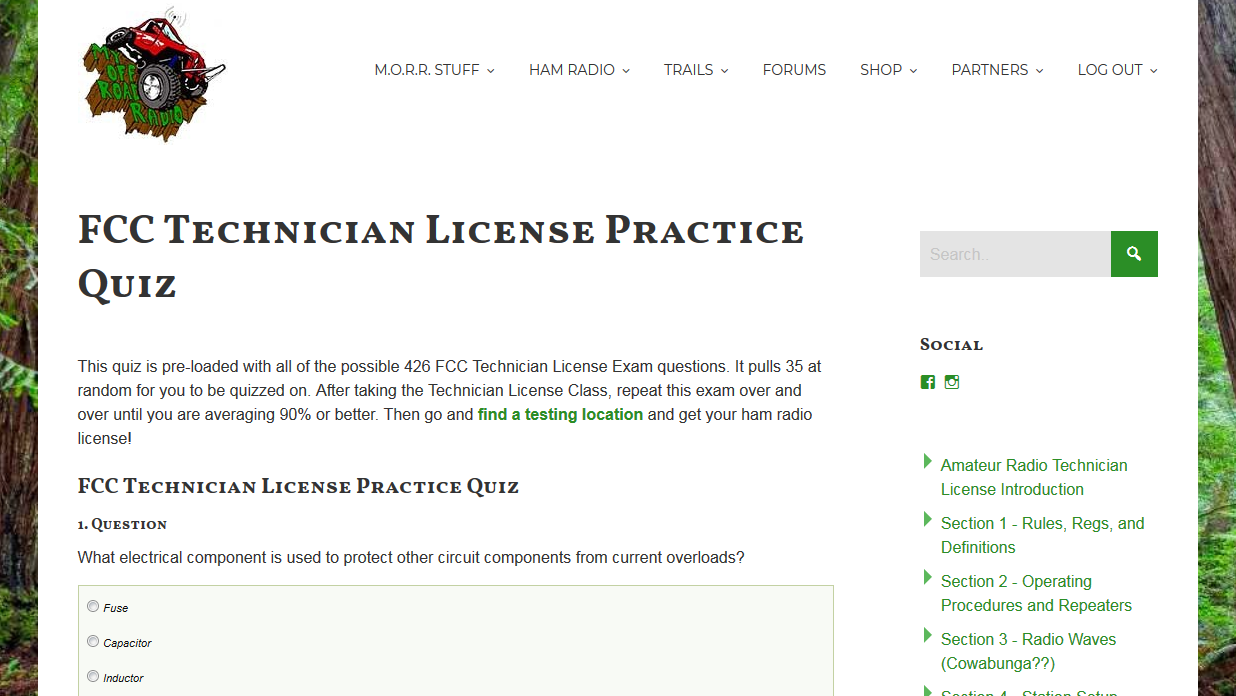 When you are ready to get your ham license, come and take our online ham radio class! We do a study class specifically for Off Roaders that makes everything relate to you, as an off roader. Most classes you will see out there will teach you ham radio from the hobbyist perspective, which delves into electrical theory, ohms law, and a bunch of other stuff that is not necessary for off roading.

And there you have it! The main differences between Ham Radio vs CB and why everyone needs to get out of CB and into Ham. Remember, when you take our online ham radio class, 15% of your registration goes back to helping keep our trails open! Just pick your favorite My Off Road Radio Partner when you register!

Join the Off Road Ham Radio Community at the Forums!