Along with the Online Ham Radio Class and Ham Radio Reviews that we do, we are also apart of a Volunteer Off Road Recovery Group on Facebook that covers Northern California. Last week, we went out on a snowy, icey, and quite dangerous recovery into the Rubicon Trail.

I need to preface this story by saying DO NOT DO THIS. Only do this if you know how to survive in the cold. You have BEYOND the necessary equipment to get through the Rubicon Trail 100 times and not break down. Remember, when doing off road recoveries, search and rescues, or any type of rescue, rule #1 is “Do Not Create Another Victim/Patient”. With that being said, we had an exciting and adventurous day! Here is our recap of our attempted Jeep Recovery on “The ‘Con”. 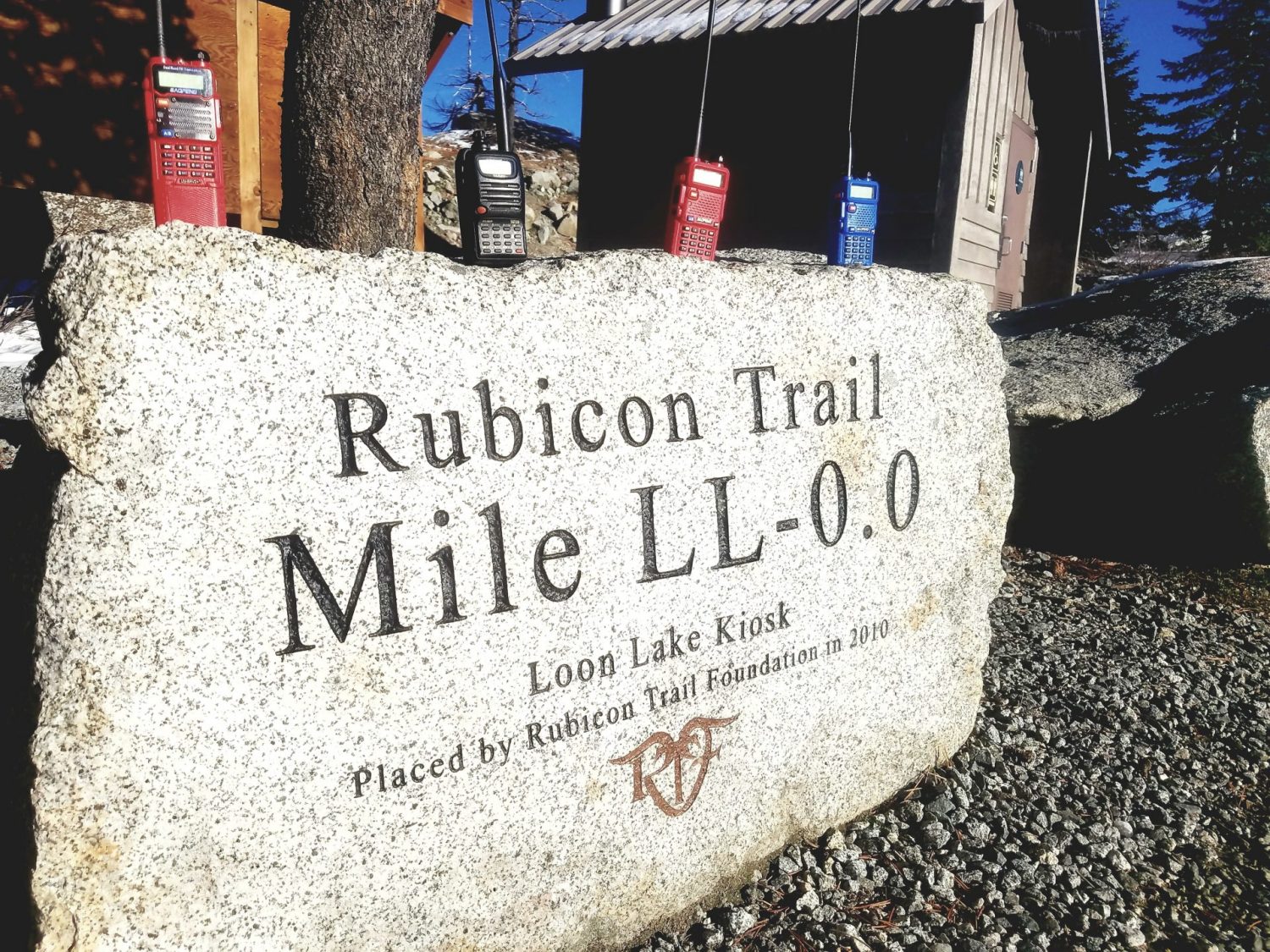 Holy crap, what a day. In short… The Jeep is still there. We were able to make a little bit of progress on getting it repaired, but at this time, it looks like it is going to end up taking a snow nap for the winter.

The Story: Recovering A Jeep From The Rubicon

Knowing this was going to be a recovery of a crippled rig from the dead middle of the Rubicon Trail, I packed the RunnerCrawler for a multiple day snow trip. It had snowed 4 days prior to the trip, so I was REALLYYY hoping for there to be no snow. I got up to the spillway at Loon Lake at 8:30am. On the trail by 9:15am, and there was a good 1-4 inches of powder everywhere still. **sigh** 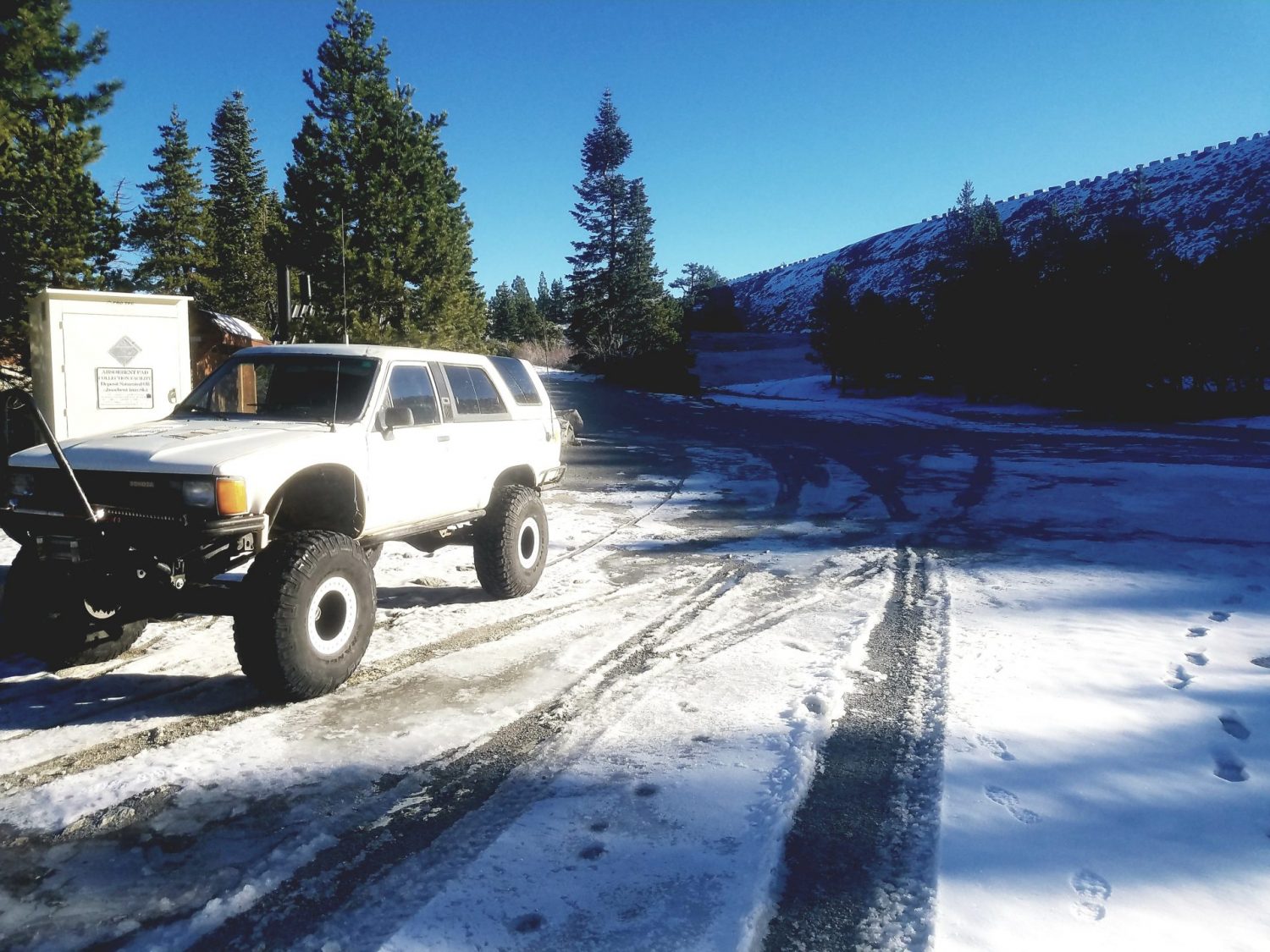 The snow condition was awesome, it was the crunchy kind that gives awesome traction. But under the snow, between the snow and the granite everywhere, was a nice layer of ice. So, as soon as you started to slide or spin out, you were done. I started the day at 5psi, by the time we got back to the spillway at 7:45pm, the tires were around 2psi because it had gotten so cold.

We made it through gate keeper with no issues, no spinouts, no hangups. But, when we got to the top of the bowl, we couldn’t see a non-icey route down. So we spent about an hour walking all over the bowl trying to find a navigable path that didn’t end up with a nonstop ice slide to the bottom of the slabs. Making it up the other side was no problem, as almost all the snow and ice was melted and dried up. 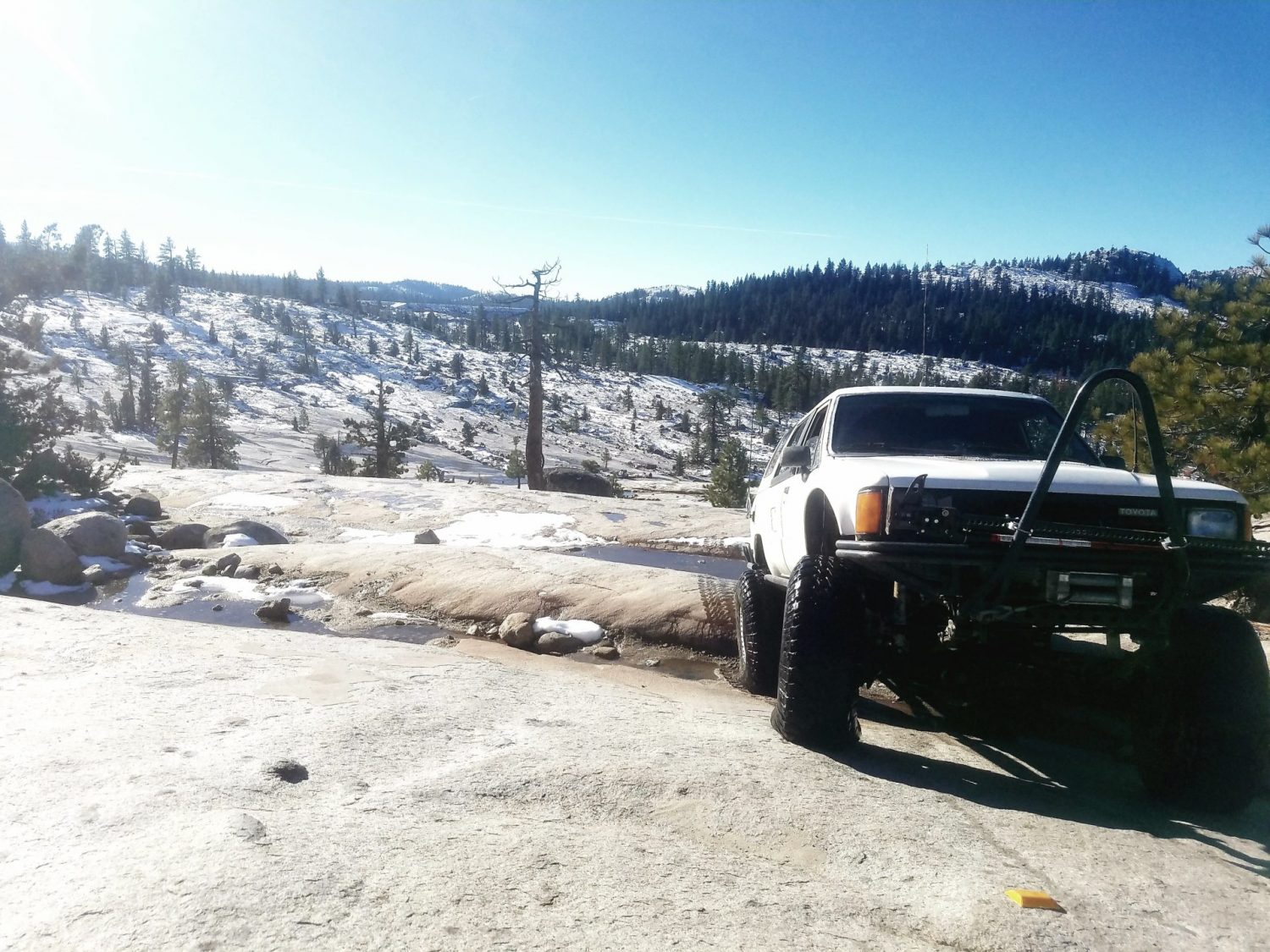 Walker Hill was interesting. There was one little group of rocks that starts what I consider the middle, narrow, steep section (the hard part of walker) that I had to drive up on the passenger side wall with the lockers on, then come back down, in order to get traction over with the icey boulders. Otherwise there were no hangups while heading up Walker.

Soup Bowl was way too snowy to even attempt. Just going through the main trail to the right of the obstacle was icey and off camber enough that I just slid over into the rock wall on driver side. Pretty much dragged my beadlocks, sliders, and mirror along the whole wall because of it. 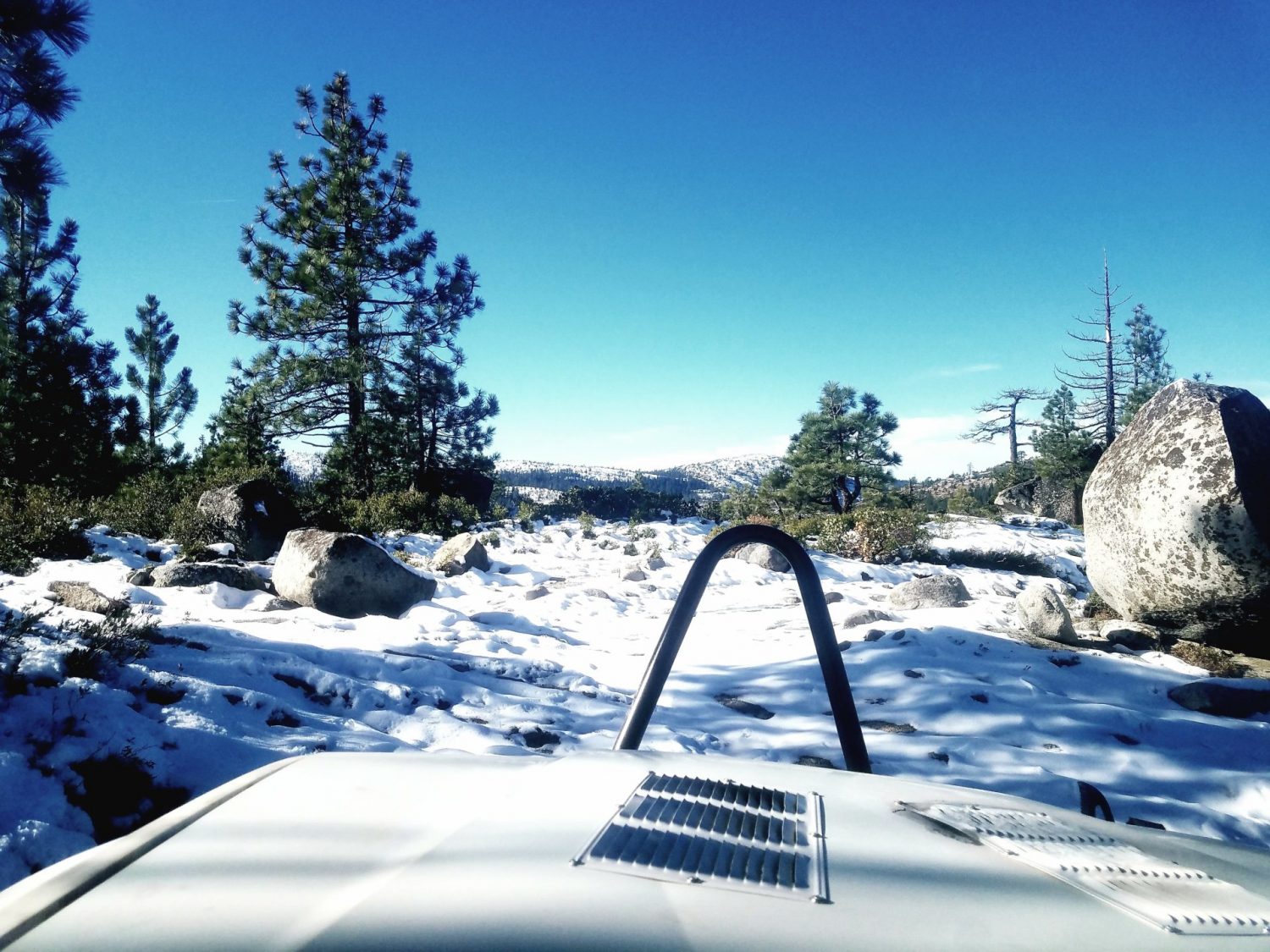 We went left at Little Sluice and got just passed the weird spot where there is a random outhouse just chilling out in the middle of some slabs. Just before it starts going downhill, down the granite slabs to the entrance of Big Sluice. While going over the slabs leaving Little Sluice, we were sliding all over the place, and it wasn’t really that much of an incline or off camber, it was just that the ice slicks on the granite were nuts. So, we decided to not descend down the slabs into the Big Sluice area… which is where the jeep is. So, instead we hiked.

We got all the tools we thought we would need (2 tool bags, a 60″ hi lift, gloves, jackets, ham radio (put the car on crossband repeat), water) and hiked 1/2 mile down the slabs to the Jeep. I am very glad we chose to leave the rigs at the top as all 3 of us fell at least once trying to walk down that section. 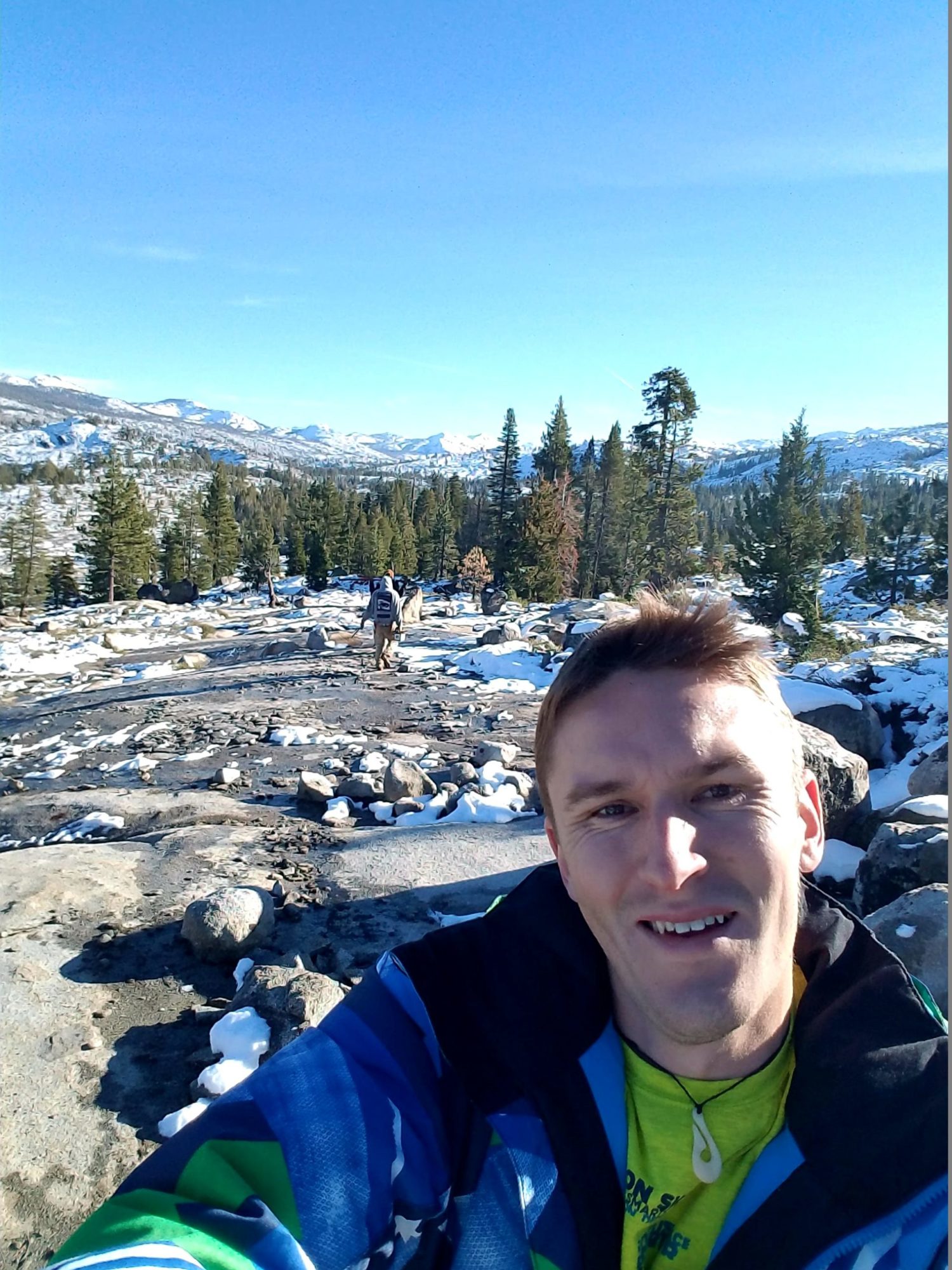 By the time we physically got to the jeep, it was about 2:30pm. Sun disappears up there around 4:30. So we got to workin. At 4pm we called it quits, packed up the tools, and started the arduous hike up the 1/2 mile of slabs to the rigs. We got back to the campsite and outhouse at Little Sluice at pretty much sun down, 5pm or so. We then wheeled out from Little Sluice to Loon Lake, in the snow, in the dark.

Surprisingly, we didn’t have any issues coming out. With how difficult of a time we had coming down the Bowl in the morning, I thought we were gonna be screwed trying to get up the Bowl at night. So I reached out to some people on the repeater to let them know we might be spending the night down there and to just keep monitoring the repeater so that someone knows where we are. 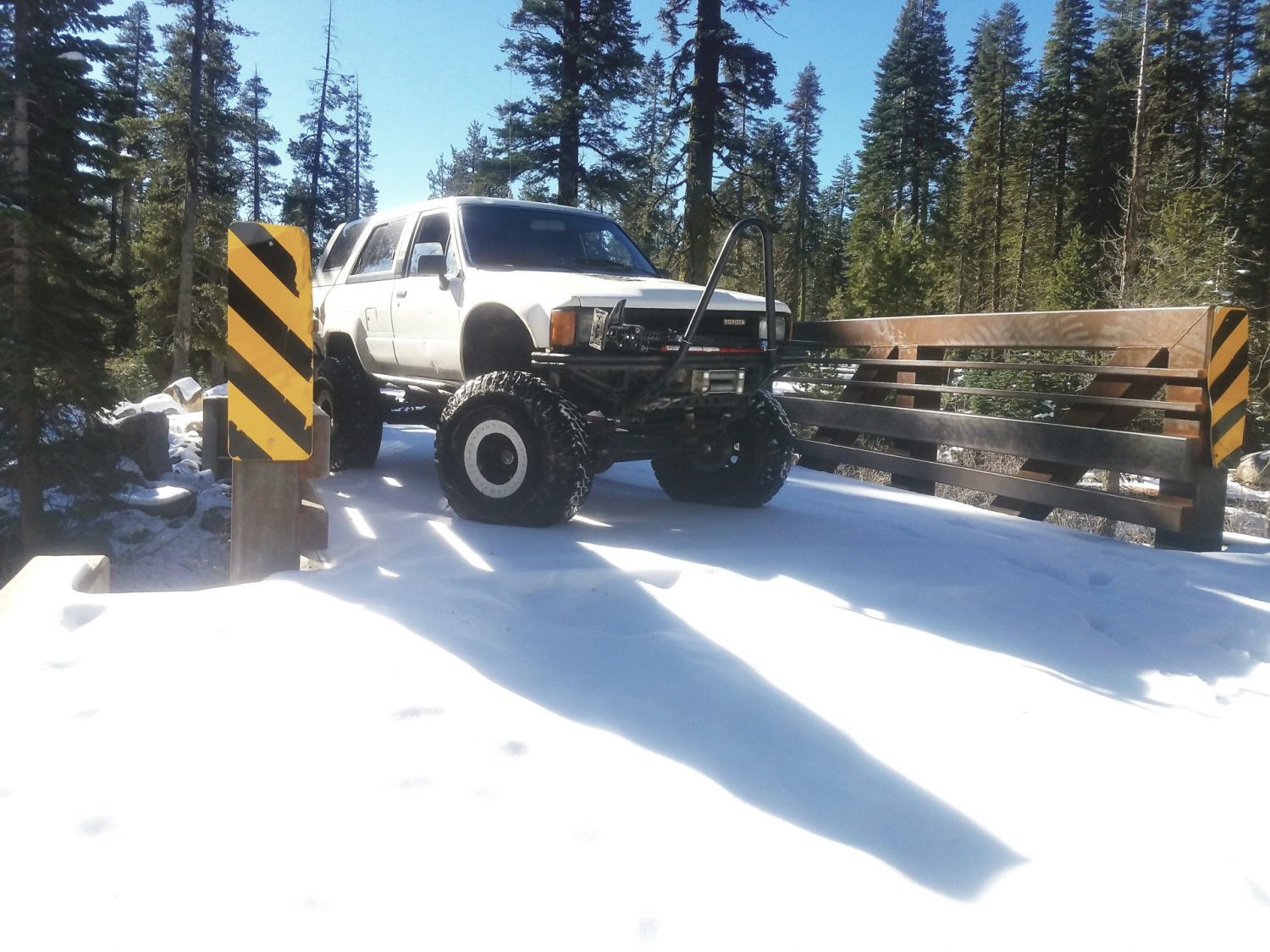 Luckily, with the sun down, and it getting chilly, everything froze right up and we had surprisingly awesome traction the whole way out. Even though we didn’t really need the help on the repeater, it was a huge stress relief knowing that a group of people knew where we were, and who were pretty much ready to come get us if need be. I kept telling them we were fine, but I thought it was pretty cool how ready they were to mount a rescue (for the rescue haha).

We were completely prepared for an overnighter though, I brought everything I would have needed for a subzero night in the 4runner, and the other guy did too. We made it out to the spillway pretty quickly though (730pm… little sluice to the spillway in 2 1/2 hours in the snow, not bad), aired up, and went our separate ways.

What Was Wrong With The Jeep:

#2 – Because of #1, the front driver track bar snapped its mount on the unibody

Because of 1 and 2, the axle wrapped and threw off the pinion angle, which grenaded the ujoint and ears on the yoke, which means…

#3 – There were 3 bolts still left in the pinion flange. We were able to remove 2 of them, and attempted to drill out the third one, but snapped 5 bits doing so. So, we cant get all 4 bolt holes cleared to reattach the yoke to the flange.

#4 – When the ears blew and the yoke pulled off the drive shaft, it bent the splines on the driveshaft

and #5 is its position… Its rear passenger tire is down in a hole. We strapped the axle up and lifted the vehicle as much as we could for it being so off camber, and put rocks under the tire. But… his rear locker isnt working either, so even in 2wheel drive and 7-8 inches of rocks under his tire, we couldnt get him backed up out of the hole… mainly because of…

#6 His front passenger wheel is planted sideways into the tip of 2 rocks. So there is a car sized rock poking its way into his wheel and keeping him from moving forwards or backwards. 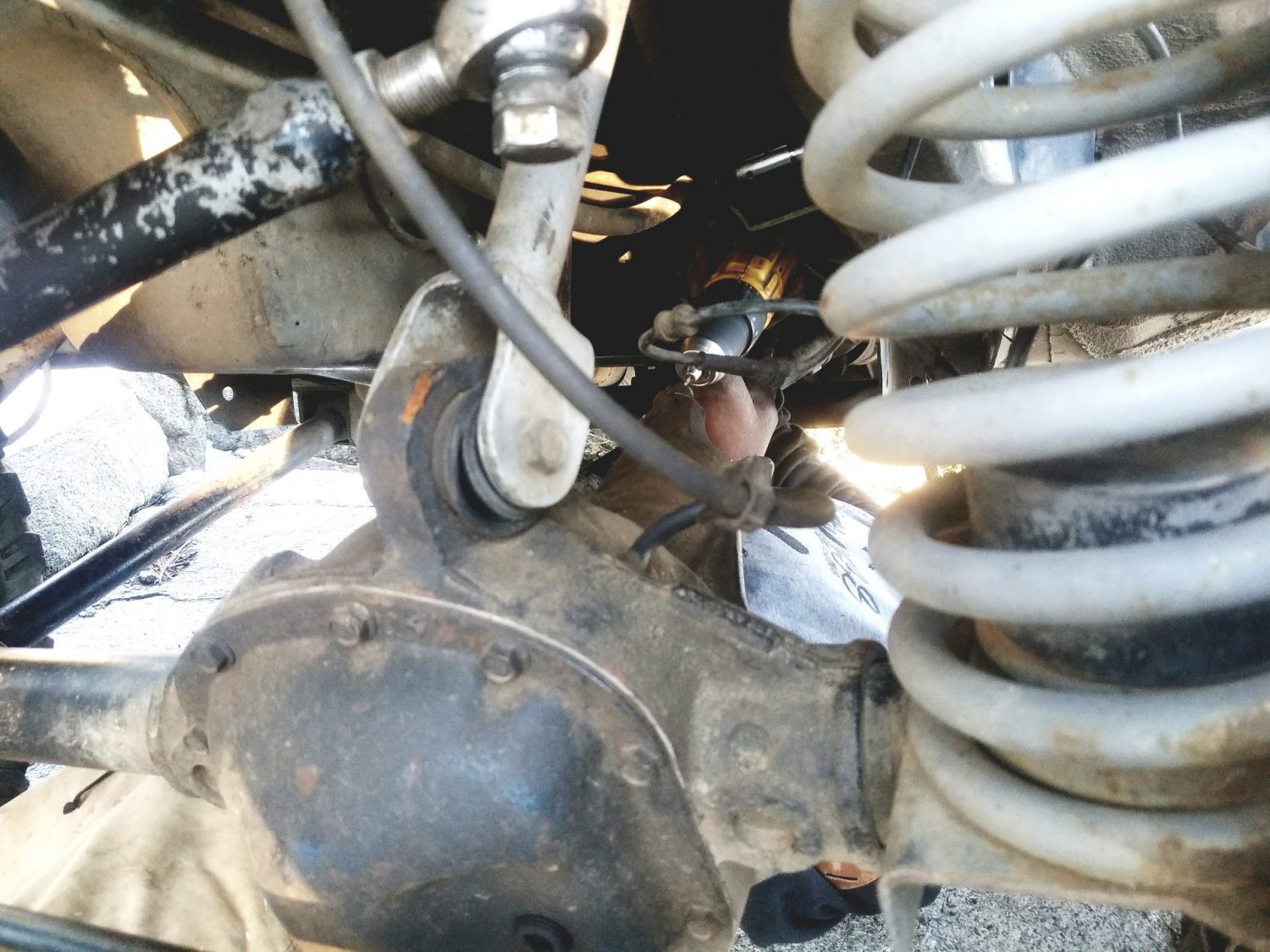 A rig needs to get down there to winch the Jeep off of the rock in the wheel. Or some straps need to be carried down with a come along or hi lift to pull him off of the precarious spot. This will solve #5 and #6, and also make the necessary repairs much easier once he can get to level ground.

For 1 and 2, we are taking some welding rods and gonna hook up a couple car batteries to try and weld the control arms brackets back in place. If that fails, we are gonna be using and interesting setup of wratchet straps and cam straps.

For 3, we are going to put in 3 of the bolts, and try to hose clamp the ear that has the stuck bolt. We might also be using a fun setup of cam straps to fix the yoke to the pinion flange.

For 4, the owner is going to bring a driveshaft off his other jeep and we will swap it out

Hopefully with that plan of action, we were hoping to gingerly get it out and off the trail. Unfortunately though, it has snowed again. This means we have called off any more recovery attempts until spring. We will watch the weather in the mean time, and if we get a week or 2 with warmer weather, we will try one last time. As of now, it looks like The ‘Con has claimed its first winter meal. 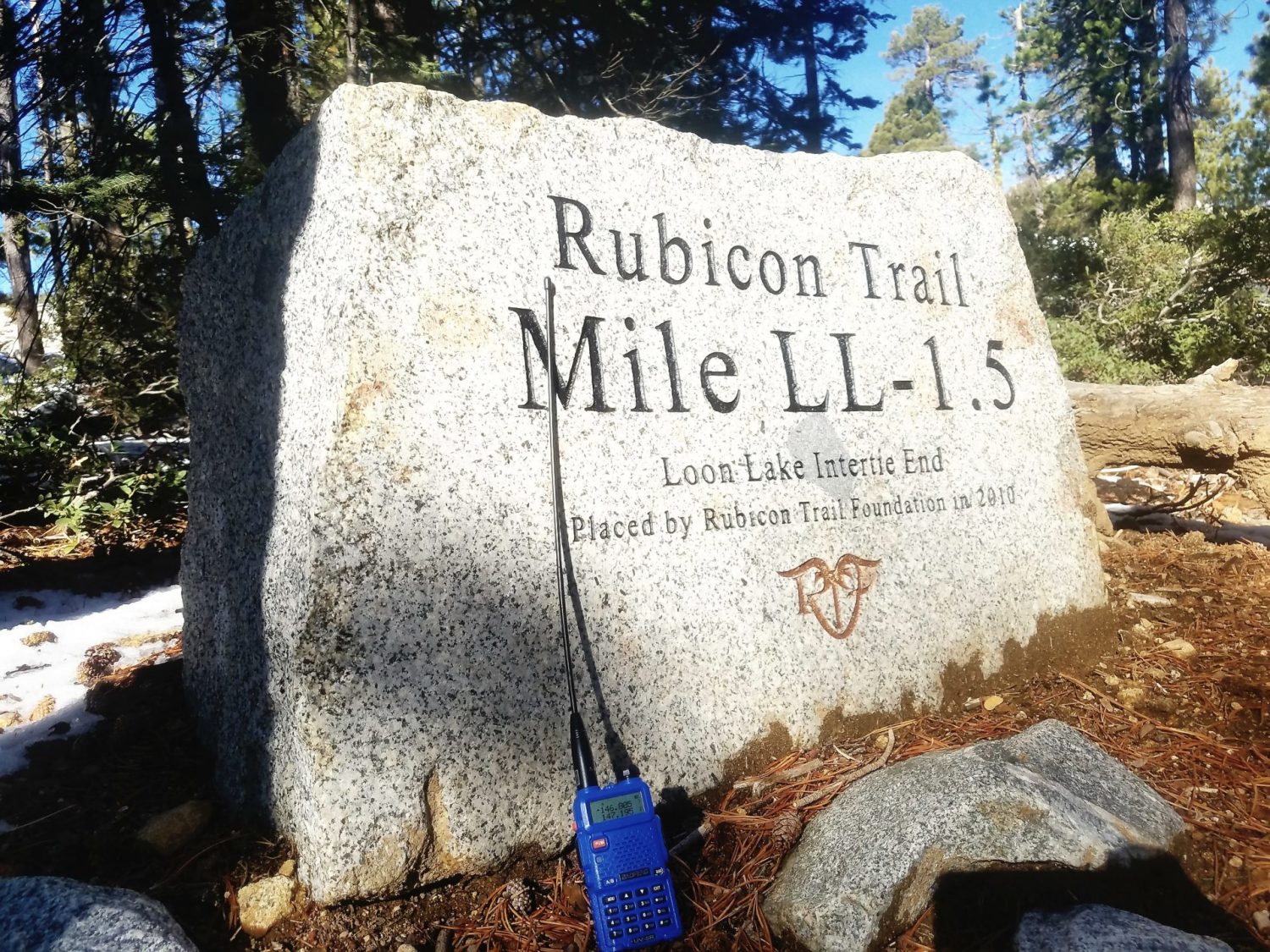 Thank you for reading! If you want to keep in touch with us when we add new content, join our newsletter! We do special offers that only show up in the newsletter, so make sure you sign up below!